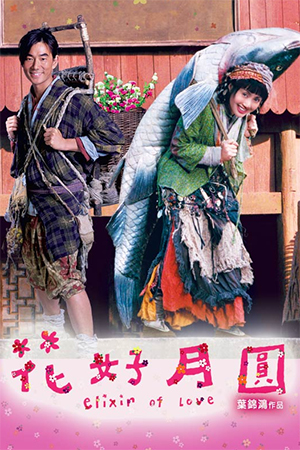 Perhaps the Hong Kong film industry is the only place you’d find a big budget romantic comedy featuring a love interest whose body odour is so nauseating that people literally faint when they come into contact with her. Of course, even if other film-makers have tackled the premise, few would have used one of their industry’s most popular actresses in the said role. ‘Elixir Of Love’ also creates interest by combining Miriam Yeung with the highly-prized Riley Yip, director of the superb ‘Just One Look’, and popular singer Richie Ren.

Although the Emperor has been blessed with a large family of sons, he yearns for a daughter to cherish and eventually marry off. When his wife gives birth to a baby girl, he is naturally overjoyed and has his royal messenger sent throughout the kingdom with the good news. Moments later, though, the midwives discover that the little girl is cursed with a powerful stench – something that is later diagnosed by the royal physician (Bee) as a severe body odour disorder. Although she grows up into a beautiful woman (Yeung), the princess is sadly quarantined and even her royal aides are forced to wear masks due to the smell. Distressed by seeing his daughter’s hopes of marriage disappear, the Emperor sends out a royal decree that anyone who can cure the disorder will marry into the royal family. Though the invitation is initially answered by all of the kingdom’s greatest medical minds, it is lowly a botanist (Ren) who manages to pass the rigorous tests and is now given the chance to cure the princess. Before he perfects his botanical cure he decides to try it out on some particularly malodorous fishmongers and their friend Heung. Everyone is unaware, though, that Heung is in fact the princess in disguise and she uses the stench of the fish stall as a cover for her own malady.

There’s only so many times you can derive humour from body odour and bemused looking bystanders passing out due to the vicious stench. This line of humour dries up fairly early on during ‘Elixir Of Love’s duration. However, while lesser directors may have made this awkward gimmick their centrepiece, Ip tries to take a slightly more sophisticated approach – well, as sophisticated as the earthy plot allows. That’s not to say that ‘Elixir Of Love’ is a success, but it is a softer, more welcome kind of romantic comedy than some of the recent hits of Hong Kong.

No matter what opinions there may be regarding Miriam Yeung, there’s no doubt that her attempts to work with a variety of intriguing directors is to be commended. Wilson Yip, Derek Chiu and now Riley Yip are given their big-budget opportunities and, although all three have produced far better works before, their respective efforts were all competent. ‘Elixir Of Love’ passes the time adequately, but there’s little doubt that it fails to stretch Riley Yip’s creative excellence and doesn’t even rank as one of Miriam Yeung’s best. The difficulty is that the general storyline is not sufficient to keep the 100 minute running time entertaining; despite a few sub-plots, there is still a feeling that the idea would be better suited to a half-hour show rather than a feature film. Though Miriam Yeung and Richie Ren are an engaging couple, the route the story takes is all too predictable – a fact that adds to the weaknesses in the story. As it meanders on, ‘Elixir Of Love’ has the obvious signs of a film being stretched mercilessly beyond its full potential.

As was noted earlier, there is a certain humanity in the romance of the lead couple that does help to neutralise the pedestrian narrative. Although even the most charismatic stars would struggle to make this anything more than diverting, it still helps that Yeung and Ren have their own pleasing charm. Yeung revels in the ‘beautiful yet flawed’ characters she always plays and Heung is undoubtedly a challenging addition to the canon. Of course, though her obnoxious smell is emphasised for comic effect, nobody mentions her peculiar Ringo Starr haircut! Riley Yip is a film-maker who is very important for the future development of Hong Kong cinema; his own, unique style and directorial nuances have been expertly displayed in ‘Metade Fumaca’ and ‘Just One Look’.  ‘Elixir Of Love’ seems to be a production where Ip’s heart is not fully in his work as it lacks that care and attention that his other work exhibited. Nevertheless, there is a certain subtlety that he brings to the initially crude narrative that shows the abilities he obviously has; it’s very hard to imagine Vincent Kok or Raymond Yip moving on from the ludicrous illness that Heung is afflicted with.

‘Elixir Of Love’ is a disappointment for Riley Yip’s followers and Miriam Yeung fans. Neither of the two offer their best work in this romantic comedy. Where the film does succeed is in its impressive production design and its periodic concentration on subtle romance, a feature that means that the love between the main characters is much more effective than it should be. While there is only ever going to be a limited amount of entertainment for non-Cantonese speakers to be derived from the parochial humour of these period comedies, ‘Elixir Of Love’ is fractionally more enjoyable than the premise implies.