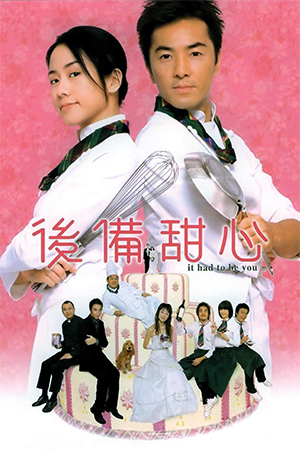 Another year goes by and another attempt to jump-start the career of fading star Ekin Cheng with a romantic comedy appears. In the past, such attempts have ranged from the diverting to the near unwatchable with the emphasis sadly on the latter. However, despite the resolute failure of ‘It Had To Be You’ – this latest Ekin vehicle – at the local box-office, there is a surprising amount to commend given the obvious commercial aspirations of the production.

Jill (Lam) is the hard worker cook at a Hong Kong bistro who is completely devoted to her boyfriend Chi despite the fact that he continues to see other women. Desperate to hold on to him and happily lapping up his excuses for lack of commitment, Jill holds out for the day when arrogant charmer Chi will finally devote himself to her. In a similar predicament to Jill is talented chef Jack (Cheng) who is turned inside out by his manipulative girlfriend Grace. Though the two have much in common, Jill initially pre-judges Jack as a lethario and, when he goes on to work with her, lets her colleagues know her prejudiced viewpoints. Eventually though, both come to appreciate their mutual situation and act as the proverbial shoulder for the other to cry on. Gradually the pair discover that their ideal partner is the other, but their life of emotional servitude is not yet over.

It’s fair to say that ‘It Had To Be You’ requires a fairly substantial suspension of belief. To see the charming Karena Lam treated so badly by her posturing boyfriend is bad enough, but to see her appealing character accept it for so long is a bitter pill to swallow; indeed the prospect of seeing our protagonists in this situation for the duration of the film is hardly a palatable one. This, though, is where ‘It Had To Be You’ tries to set itself apart from its contemporaries despite the obvious adherence to convention. Instead of using the ‘big moments’ that such genre flicks constantly utilise to sign-post transitions of mood in their narratives, directors Andrew Loo and Maurice Li favour a more understated approach.

The rom-com genre is too well established to spring any surprises – the same clichés and the typical development of the relationships is doggedly stuck to in this production. Nonetheless, the real charm of the film is its allowance to let the background characters play a part in the overall storyline. These characters are also not the usual ‘quirky’ best friend roles that infest such narratives, instead they are well written players in the overall romance presented here. Kudos goes to the film-makers for developing the character of Jill’s deaf mother and creating a genuine chemistry between her and her daughter; the scenes that feature these two performers have an earnestness that has the tinge of reality. Eric Tsang is also welcome as Jill’s boss, showing a wisecracking style early on only to then be given a very poignant scene late on in the film. The insertion of such an effective examination of grief is a million miles away from the genre norm, but succeeds admirably.

‘It Had To Be You’ is not ground-breaking enough to attract firm detractors of the genre, but there is a vibrancy that is hard not to warm to. Karena Lam continues to enchant and she also strikes up a solid partnership with Ekin Cheng, an actor who will forever be haunted by his critics but manages once again to impress this reviewer with his efforts. Perhaps I’m easily pleased, but I found the lead pair to be particularly adept at playing to each other’s strengths and they subsequently made a believable couple.

For those who have had their fingers burnt on numerous occasions by Hong Kong rom-coms, I offer up ‘It Had To Be You’ as a partial redemption. As with ‘Love On The Rocks’, this is an effort that punches above its weight despite its generic conventions. It may not be art, but there’s enough virtues here for those who care to look.