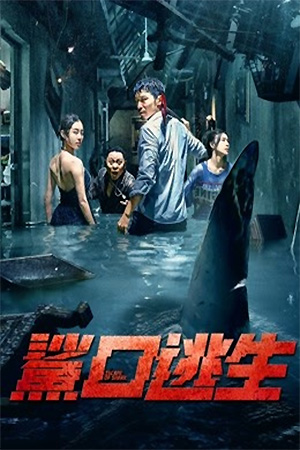 I, first of all, have to credit the superb channel YouTube ‘Movie Timelines’ for helping me to discover this; in his recent Top Ten Jaws rip-offs, this Chinese entry piqued my interest, thanks in no small part to his very witty description of it. Check out the channel if you haven’t seen it before. Anyway, as ‘The Meg’ was pretty much a Chinese Jaws film made with Hollywood expertise, it stood to reason that there might be other, lower-budget offerings out there that would help an hour pass by enjoyable. And clocking in at a modest 77 minutes, you would think that you wouldn’t impatiently look at your watch once…

A variety of guests are gathered at a Thai beach resort, including all of those genre staples like ‘Troubled Hero in Need of Redemption’, ‘Obnoxious Wealthy Person’, ‘Shark Fodder 1’, ‘Beautiful Science Woman’. All of these disparate parties are brought together in a local hotel when a small tsunami washes a couple of sharks into the confined space and force them all to work as a team to repel them.

The title ‘Escape of Shark’, grammatically at least, implies that the dear old Carcharodon carcharias is the hero of the story and simply wants to free itself from human curiosity. Alas, the antagonists here are still the put-upon sharks and they are given side characters aplenty to feast on. ‘Escape of Shark’ is a remake of Australian thriller ‘Bait’ which, while not a masterpiece either, is several notches above this effort.

That’s not to say that ‘Escape of Shark’ is without entertainment value even though, as I implied earlier, it all seems remarkably drawn out for 77 minutes and I did wonder if they had redefined how long a minute was while I was distracted. Firstly – and this is in common with ‘Bait’ and ‘Deep Blue Sea’, although it strains credulity for sharks to end up in enclosed spaces like laboratories, supermarkets or hotels, the nature of the environment helps pump up the tension. Seeing people scrabbling around sets that look like they were re-used from ‘The Poseidon Adventure’ and trying to escape a shark gives the whole film a much greater sense of danger and immediacy. You have to really buy into the idea that sharks can navigate through these spaces with unfettered confidence while also having an insatiable hunger that even munching a few supporting actors will not satiate. There is also something to be said of the hero who proves to be resourceful and appealing; it is the typical redemption arc of course, but the result greatly helps get you through the film.

Where ‘Escape of Shark’ falls down is in the very modern folly of writing cheques that the special effects can’t cash. When the CGI shark does appear, its movements and textures are vaguely ludicrous and destroy whatever goodwill the film had previously built up. And director Zhu Jiang will insist on showing us shots of the underwhelming antagonist, another reminder that modern effects have made filmmakers quite lazy. It’s also a criminally predictable piece of entertainment that should come with a scorecard so that you can tick off the moment certain characters become shark food. There isn’t even the slightest attempt to deviate from the creaking formula. ‘Escape of Shark’ isn’t quite as woeful as its grammar but it’s also not the kind of movie you should urgently seek out either.