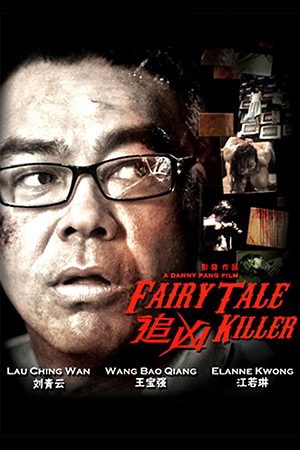 With heavy skin make-up and a deadened look in his eyes, Wu (Wang Baoqiang) goes to a police station to hand himself in as a murderer. The only person he will communicate with, however, is Wong (Lau Ching-Wan), an inspector who has lost himself in his work to escape problems at home. Though Wu confesses to three murders, all of the supposed victims are found alive and well, totally oblivious of any danger. Such an apparently bad taste hoax incurs the anger of Wong who lashes out at the gibbering, clearly deranged young man in his custody and throws him out of the police station.

Days later Cheung Fai – named as one of the victims of his crusade against ‘wolves’ by Wu – is found dead in a field and the terrible realisation comes to Wong’s team that the killer was set loose by them.

Danny Pang – sans regular collaborator and brother Oxide – directs a thriller that starts intriguingly, but sees its promise quickly evaporate into the ether. After ninety minutes, ‘Fairy Tale Killer’ drags itself to its conclusion with the moderately distracted viewer in tow. The concluding ten minutes is rather entertaining if improbable; a series of bizarre traps designed by Heath Robinson if he dabbled with Crystal Meth.

‘Fairy Tale Killer’ tries so hard to be an intelligent thriller that it forgets to be thrilling or exciting. Somewhere between the plot-holes and the intrusive, booming soundtrack, all of the possible tension disappears. Pang introduces a sub-plot regarding possible departmental corruption that plays out like an especially flaccid McGuffin, a throwaway inclusion that could be enrich the narrative but does significantly less; the theme of mental illness and autism is also toyed with by Pang though its inclusion is only slightly more developed.

Following some great performances in recent hits like ‘Overheard’ and ‘Life Without Principle’, Lau Ching-Wan is one of this productions major assets and he gives underdeveloped material more gravitas than it deserves. None of his fellow actors are given anywhere near as much to work with meaning they melt into the background early on, further robbing the film of an emotional core. Without this and a noticeable lack of cohesion throughout, ‘Fairy Tale Killer’ concludes as a moderately interesting feature and not a great deal more.