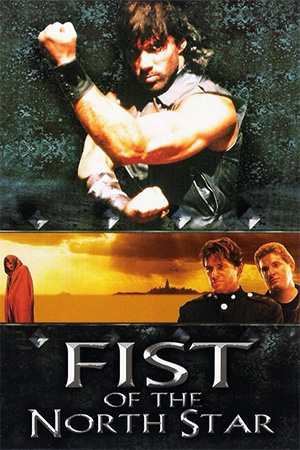 In an unknown time, the world is devastated by a nuclear war and left a barren and desolate place.  The people that survived struggle for food and water, avoiding the perils of the acid rain that falls daily.  Lord Shin (Mandylor), the leader of a sect of martial arts known as the “Southern Cross”, has emerged to declare himself the ruler of a new world and is crafting it into his own twisted vision.  Meanwhile, Kenshiro (Daniels) is the remaining member of the “Northern Fist” martial arts style and he wanders the world searching for his lost love Julia, who was taken from him years ago by Shin.  Eventually, he hopes to face his true destiny to become the “Fist of the North Star” thus returning order to the chaos but that cannot happen until Julia is returned to him.

Based on the popular manga series by Buronson, this live-action adaptation of ‘Fist Of The North Star’ actually remains surprisingly faithful to the 1986 anime movie of the same name. Unlike the majority of Hollywood adaptations, the main plot is still relatively intact and the film follows the original set pieces, particularly the central confrontations, as closely as possible. Similarly, the cinematography and scenery is also in keeping with the film’s inspirations and there is a suitably grimy look to the production that really makes you feel like this is an apocalyptic wasteland.  Understandably though, the budget restrictions do take their toll and the B-movie cast are far from ideal, but considering what they have to work with I still think this is quite a valiant attempt.

Another primary element that has remained is the over-excessive violence, as Kenshiro always likes to dispatch of his opponents in a very blood-spattering manner.  In this version heads explode, bones crunch and limbs are torn from their sockets with incredible accuracy, drawing movie comparisons with the likes of ‘Story Of Ricky’ or pretty much any cheesy horror flick you can think of.  Fans of these genres will no doubt get a kick out of ‘Fist Of The North Star’ and if you don’t have a weak stomach, you will surely be able to enjoy these bizarre amputations.

Unfortunately, the action scenes don’t hold up quite so well.  In the comic, Kenshiro was able to perform a hundred punches or kicks in a matter of seconds but without the assistance of an enormous special effects budget this is practically impossible to recreate with real people.  To counter this, the crew have decided to go with the more realistic approach and use the natural skills of their stars as a replacement.  This works with an actor like Gary Daniels who has a background in this kind of fighting and pulls off some fine bootwork, but with his co-stars it is often a little harder to find a degree of satisfaction.  That said, the scenes with Daniels do just about enough to maintain your attention and he certainly proves that he as good as (and generally a lot better than) the likes of Van Damme, Seagal or Ray Parks, so deserves to be hitting the big time for his abilities alone.

Although far from perfect, ‘Fist Of The North Star’ is still a relatively fun adaptation that tries its best to service both fans of the source and martial arts movies in general. If nothing else, I think at least it proves that Daniels is A-list material and should be riding the kung fu wave that is hitting Hollywood shores at this time.