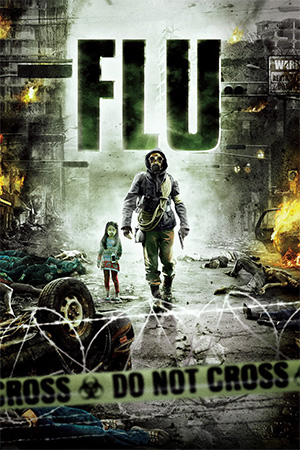 There’s a slight sadism in watching a pandemic thriller during the current Coronavirus outbreak – surely now is not the time for big-budget apocalyptic drama. Yet, like it’s Hollywood counterpart, there is something almost other-worldly about these slickly produced Korean disaster films that makes them far removed from the sad reality around us.

Emergency worker Kang Ji-hoo (Jang Hyuk) saves research scientist Kim In-hae (Soo Ae) from certain death one evening in the city. Rather than being indebted to him though, Kim In-hae insists on returning to the scene of the accident to retrieve something and the heroic worker reluctantly agrees to go on his own to find the mysterious cannister. Meanwhile a container full of illegal workers appears at a Korean dock; all are dead except one sickly worker who manages to wriggle free from the authorities. Unbeknownst to him, the runaway has a deadly contagion that passes to people throughout the city, gradually leading to a pandemic with a rising death-toll. As the pandemic threatens Seoul, decisions are made to quarantine the immediate vicinity though Kim In-hae, accompanied by Kang Ji-hoo, tries to get the cannister containing a possible cure back to her laboratory. When Kim’s daughter begins to display signs of the strain of influenza, it is a race against time to test the cure before the authorities’ final Scorched Earth policy comes in to place.

‘Flu’ is a bombastic blockbuster with photogenic stars, a cute moppet, a comedy sidekick and a conspiracy theory thrown in. In other words, it’s about as far removed from the current crisis as one could imagine. As such, it is a mostly gripping attempt to mimic its Hollywood rivals and isn’t afraid to get a bit grittier than its contemporaries. The closing third of the film turns from pandemic drama to bloody political thriller which further removes it from the Coronavirus situation. It does prove that Korean cinema has the budget and wherewithal to compete with its more illustrious rivals and is a chugs along at a solid pace. Though it suffers from an inflated duration – so often the problem with Korean films – it entertains and, occasionally chills with aplomb.

The success of ‘Flu’ will depend on the willingness of the viewer’s affection for the genre as there isn’t anything particularly surprising here. The film is also hamstrung by a lead female character who is, for nearly all of the duration, a whining, ungrateful protagonist who willingly puts others in danger despite being a rational scientist. It just so happens that she is beautiful which is possibly intended as a distraction from her annoying traits. Thankfully Jang Hyuk is a charming lead and carries the film on his shoulders with consummate ease.

If you’re in the mood for a measure of catharsis, mid-isolation, ‘Flu’ is a well made disaster film that is just polished enough not to be too harrowing in the current climate. As such, it stands capably alongside Hollywood hits like ‘Outbreak’ and ‘Contagion’.