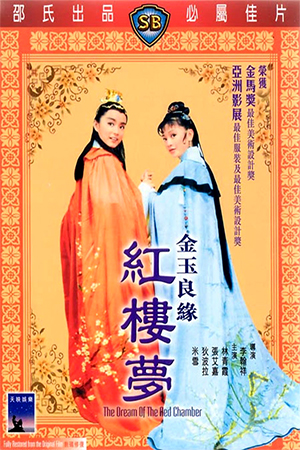 Brigitte Lin fans are aware that the actress had two distinctive acting careers, a formidable warrior woman of action cinema during the eighties and early nineties, and the flower of mushy Taiwanese movies in the seventies.  Fans are also keenly aware of how difficult it is to see most of her earlier movies with English subtitles.  Celestial’s release of Shaw Brothers’ ‘The Dream of the Red Chamber’ is cause for celebration then, marking as it does something of a bridge between her earlier movies and the Hong Kong films that made her into a cult icon.  With this movie Lin played her first gender-bending role, and holds the camera entranced with a witty performance.

Unfortunately, the film itself falls far short the sum of its dazzling parts, with a central love story too lightweight to sustain either the bulk of the plot or the grand tragedy of the climax.

Adapted from a classic Qing Dynasty novel, the film focuses on the Jia family and the efforts of the family to marry their son Bao Yu (Lin) to a socially acceptable bride.  Bao Yu is in love with her cousin, Miss Lin (Chang), but the machinations of his family threaten to ruin this perfect match.

When seen through Western eyes, films depicting China’s dynastic history threaten to lose historical and emotional relevance.  Yet ‘The Dream of the Red Chamber’s slender story seems to have little substance to lose.  Rules of social etiquette are adequately conveyed (Bao Yu’s frowned-upon friendship with an actress), but director Li Han-hsiang shows greater interest in his two star-crossed lovers at the expense of supporting characters.  The original novel was acclaimed for its multi-character, intricately structured plot, but this is sacrificed at the altar of romance and teenage brooding.

At times the vibrant, colourful cinematography (evidence of director Li’s background in painting) and detail in the shots, including near omnipresent falling cherry blossom, provide irresistible eye candy.  But, coupled with a full complement of songs (yes, this is a fully-fledged musical – although it’s doubtful Lin’s own voice was used) makes the experience a little like dining out at Willy Wonka’s chocolate factory: both delicious and indigestible.

Li received great acclaim for his many Huangmeixi (period operas), but as a director his compositions are stagy, favouring uninvolving wide shots and a dizzying overuse of the zoom.  Controversially, he reduced the ages of the lovers making this a teen-romance, proving that whatever limits he had behind the camera he was a canny judge of what the audience wanted.

Given the strongest character, Brigitte Lin makes the film hers.  Taking her to be a young lad requires nose-bleed inducing belief suspension, but her full-blooded performance, manfully strutting when walking with “society men” and plunging into despair when her love leaves her, reveals she had little trouble carrying a movie from any genre.