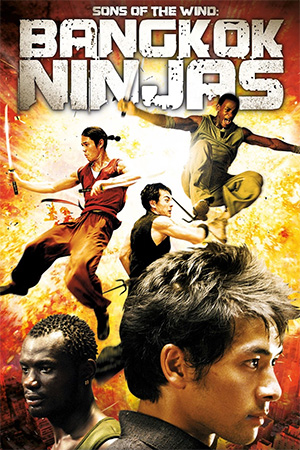 A French action film with a distinctive Eastern influence and setting, ‘Sons of the Wind’ is another attempt at Euro action incorporating the free running sport known as parkour. A sort of ‘District 13’ light, ‘Sons of the Wind’ starts off well, its unfussy action/adventure credentials evident from the get-go but unfortunately slips into tired and uninspiring formula as it tries to provide the viewer with requisite thrills. The film certainly has good intentions and on occasion a couple of decent action sequences but proceedings are just too lifeless and pedestrian to inspire any real sense of fun.

The set up is fairly simple as a group of parkour pioneers (the French Yamakasi group) up sticks and move to Bangkok to open a gym to teach unfortunate kids the art of running up walls and jumping from building to building. But no sooner have they done this (shown in one brief montage) than they get mixed up with would be thieves/ninjas/street urchins Tsu (Elodie Yung) and Kitano (Santi Sudaros) who are getting into all kinds of trouble with the local Yakuza. So the group decides to help the two, after much opposition from Kitano and various scenes of parkour flavoured action.

It’s heart is in the right place but ‘Sons of the Wind’ unfortunately doesn’t live up to the promise of being the fluid, fun and fast moving action film it should be. Ok, it’s pretty fast moving but the film doesn’t always succeed in capturing the fluid momentum of parkour, the scenes featuring it feeling somewhat truncated by fast cut editing. Likewise the martial arts scenes, while not bad, suffer from unnecessary editing choices and a lack of focus. The end free-for-all just feels like a scrappy mess rather than an ultimate showdown and various other scenes don’t live up to the promise of what the athletes/fighters involved can perform. There are a couple of decent sequences including a multi fight on a bamboo scaffold structure and a very impressive shot of the camera following three of our protagonists as they scale down an incredibly high structure.

Unfortunately, despite the odd spark of inventive action and a feisty performance from Elodie Yung, nothing much else engages in ‘Sons of the Wind’. There’s not much to the characters and while adrenaline charged action films don’t need an excess of character, proceedings here just seem rather shallow and superficial. Despite attempts at fleshing out the group’s characters (including one barmy sub plot about one of the free runners getting spiritual guidance from his long dead grandfather) it’s hard to care what happens to everyone. We are simply supposed to think they are cool because they run up buildings and live a “free spirit” life. The plot would have been more interesting if it had simply focused on the characters of Tsu and Kitano as the main protagonists.

Not a complete write off and entertaining in parts, ‘Sons of the Wind’ doesn’t quite reach its potential and could have done with a little less style and a little more substance. Pretty cool ninja opening sequence though.