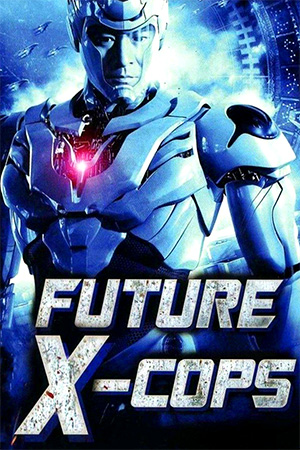 As I was about to press ‘play’ on my DVD remote control – with ‘Future X-Cops’ in the machine awaiting the laser – my future self appeared to me. “I have come from the future to stop you watching this insulting piece of cinema, lest you turn your back on the whole of Hong Kong cinema as a result” I announced, tears welling in my hazel eyes, arms outstretched sympathetically.

“It can’t be that bad – I sat through ‘Kung Fu Cyborg’ and, although I’ve acquired a nervous tick, I’m still alive. Anyway, both of my readers are waiting to see if it’s worth buying.” the younger, more innocent me replied.

“But you’ve just recovered from a near lethal dose of Wong Jingery in the shape of ‘Beauty On Duty’, surely your public duty can be postponed?” I pleaded.

“No, I have to support my beloved Hong Kong cinema no matter what tribulations it puts me through.” that foolish yet devilishly handsome (ok, I’ve embellished things a little bit) Andrew insisted.

And so, before I go back in time to warn myself of the imminent danger in store, it seems fitting to send out a similar message to readers.

Andy Lau plays a cop from the future, sent back in time to stop a cyborg supervillain from killing the younger self of a man who will eventually be the inventor of free energy for all. While trying to find the genius kid, our hero charms the lovely Barbie Hsu and accidentally reveals his own robotic powers to the general public, becoming a national hero in the process.

It would be easy to complain about the computer effects of ‘Future X-Cops’, though quite a few of them are nowhere near as bad as they might have been. We also recall that a film with exceptional effects, namely Michael Bay’s ‘Transformers’, was akin to having your head slowly crushed in a vice, so any smugness about inferior sfx from the Far East is impossible to muster. ‘Future X-Cops’ has so many more pressing problems than just the visual aspect.

In one of the first scenes, Andy Lau fights a group insect based humanoids to save the elderly scientist who has given equality to mankind. It is quickly revealed afterwards that during the fight, the ringleader Kallon, stole a time-travel device and everyone knows he’ll be going back in time. Such ‘details’ are just thrown into conversations in a kind of ‘awful weather we’re having at the moment’ kind of way in lieu of an explanation. For some reason Andy Lau has to become a fully-fledged cyborg to accomplish this mission and slots neatly into the past. Wong Jing is loathe to knot consecutive scenes neatly together, almost making this sci-fi flop incomprehensible out of spite. What the writer/director does provide is seemingly endless scenes of two annoying kids – my own bête noire – empty nods to whatever is currently in popular culture and a few moments of teeth-grindingly insincere pathos.

‘Future X-Cops’ doesn’t even have the virtue of brevity as it clocks in at one hundred minutes – six thousand seconds and every single one of them feeling like hot shrapnel cutting into your wearisome flesh. By the time we drag ourselves to the credits it feels like we’ve just watched the whole of our lives flash before us while being rolled down a hill in a barrel full of rusty nails.  Wong Jing and solid film-making are not mutually exclusive, but work like this will hardly convert his many detractors.