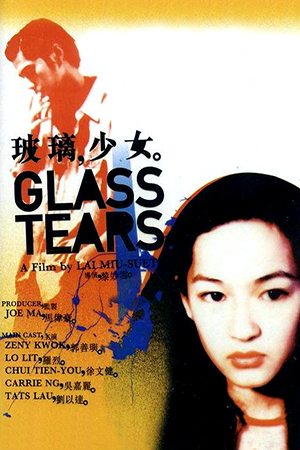 After the wonderful ‘The Floating Landscape’, I resolved to watch Carol Lai’s directorial debut ‘Glass Tears’. Not only did it make a reasonable critical impression, but it also appeared at Cannes as one of the official Hong Kong selection. Whether it lives up to Lai’s exceptional follow-up is the real question though.

A phone call alerts ex-policeman Wu (Lo Lieh) to the fact that his grand-daughter Cho has run away from home once again. Travelling to Hong Kong to see her parents, Wu finds them to be somewhat apathetic regarding Cho’s situation and therefore resolves to find her himself. Putting his old police training into practice, Wu manages to dig up a few clues as the her whereabouts. His task is given an unexpected boost when a young girl, calling herself P (Kwok), agrees to help find Cho insisting that the runaway owes her money. At first the significant age difference means that the two parties fail to see eye to eye and P tries to escape from Wu’s watchful eye more than once. However, as the search continues, both of them see that there is a common theme of loneliness and listlessness in both of their lives. This unlikely union brings to the surface questions about both of their sad lives and the real circumstances of Cho’s disappearance.

Though certainly rough around the edges, Carol Lai’s work is a far stronger vision of youth than the aimless, yet critically lauded ‘Gimme Gimme’. While both productions seem to have the intention of showing how frustratingly self-important Hong Kong teenagers seem to be, ‘Glass Tears’ relies more on a sense of pathos that gradually develops – a move that, eventually, proves to be a well chosen one. The friendship between the initially annoying P and the cool, calm Wu is intelligently fleshed-out; there are no grand gestures between the two which helps ground their journey in reality. Lai intentionally leaves many unanswered questions about all of her characters, especially Cho’s parents. This mostly works as it tries not to justify some of the less pleasant sides of the characters’ edges, though it does sometimes seem as if P’s wastrel mother is offered as some kind of excuse for her faux arrogance.

While ‘Glass Tears’ is a solid debut for Carol Lai, it has a few signs of directorial immaturity within it. Despite good photography on the part of Tony Cheung, Carol Lai lets the atmospherics get diluted by pointless camera trickery. The mood of uncertainty and the admirably off-kilter world created by the production team is undone by these empty MTV-isms. It almost seems that Lai is trying out every camera style in the book without making any of them look convincing. Due to this problem, ‘Glass Tears’ looks very much like a directorial debut – albeit quite a promising one.

Even though the bemusing over-stylisation and occasionally grating character ‘quirks’ detract from the overall effect of ‘Glass Tears’, there are still a few excellent performances to savour. Lo Lieh is an actor who was never really given the thespian credit he deserves; often his masterful performances in classic Shaw Brothers films were foolishly overlooked. In one of his very last roles, Lieh excels, taking a slightly underwritten character and breathing life into him. At the other end of the age scale, Zeny Kwok impresses as P – her work here, coupled with the performance she gave in ‘Merry Go-Round’ is an indication of her promise. Meanwhile in the background, Carrie Ng and Tats Lau Yi-Dat are convincingly cold as Cho’s distant parents. in conclusion then, ‘Glass Tears’ is a debut that scores with its fine performances, but is let down by uneven work behind the lens. Nevertheless, Carol Lai followed this up with ‘The Floating Landscape’, a work that showed what an important local film-maker she will undoubtedly become.