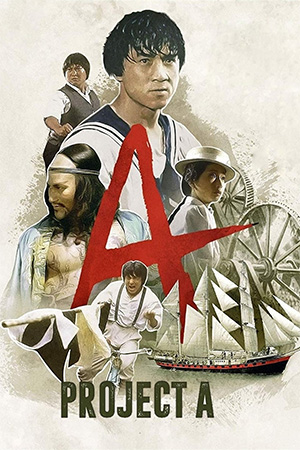 Dragon Ma (Chan) is the bravest and perhaps most unruly member of the Coast Guard during turn of the century Hong Kong. Indeed, during a farewell drink before his unit’s departure to stop pirate king San Pao, Ma and his fellow men are involved in a fight with their great rivals in the police force. However, the real enemies remain the pirates and whoever is supplying them with guns. After their ships are once again destroyed, the Coast Guards are forced to amalgamate with the police force they had only recently battled. This brings Ma face to face with his rival Tsui (Biao) and they soon realise that the only way to stop the pirates’ allies is to work as a team. Completing the threesome is Ma’s shady friend (Hung) who operates outside of the law and therefore proves to be a invaluable. What follows is their crusade on land and sea to stop the pirate king San Pao.

The Hong Kong Critics Guild recently counted among the 100 best Hong Kong films ever and there’s little argument against that decision. Jackie Chan opened up a completely new avenue in Hong Kong cinema with this 1983 classic. Using the conventions of the 30’s Hollywood swashbucklers mixed with his insane stunts and sublime fight action, Chan produced one of his best ever films. The film has a big budget feel that really shows how well it had been produced and certainly directed. Sammo and Yuen are integral parts of the film with their vastly differing characters; Sammo especially relishes his role as a petty crook, a trait he often utilised after. However, Jackie remains the star of the show; whether he’s hanging handcuffed from a clocktower or taking on a gang of heavies with a bicycle he blazes across the screen. Certainly one of the most important films in Hong Kong’s cinematic development and a real classic.