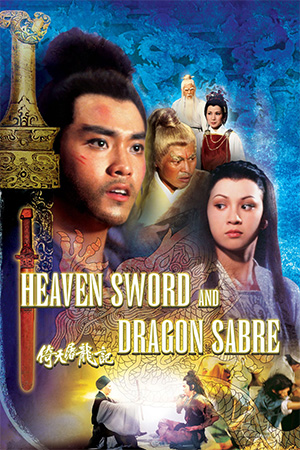 There are exoteric swordplay films, ones which make an attempt to include the layman in the heady martial world, and there are esoteric ones that makes no apology for their convoluted storylines. Chor Yuen’s wildly entangled version of Chin Yung’s ‘Heaven Sword And Dragon Sabre’ sits in the latter category and wears its absurdities proudly on its sleeve.

Chang Wu Ji is a young orphan whose parents committed suicide after severe pressure from a few insidious clans within the martial world. Added to this woe is the child’s terminal wound, a progressively debilitating strike called the ‘Freezing Palm’ that has no known cure. His current guardian leaves Chang with the famed Dr. Wu in the hope that continued treatment will stop the inevitable cumulative effect of the fearsome blow. Unfortunately, despite a decade of intensive care, Chang’s ailment remains and he decides to dedicate the remainder of his life to finding those who were responsible for his parents’ demise. As he starts his journey, Chang encounters a series of figures from the various rival clans who are warring for supremacy in the martial world and involves himself in the numerous conflicts he witnesses. Soon the young avenger is joining the trail for the ‘Heaven Sword’, a blade supposedly protected by a golden-haired warrior who Chang once studied under.

To devote any more time to the synopsis is futile as ‘Heaven Sword And Dragon Sabre’ is the kind of bewildering concoction that cannot be fully detailed in a simple review. With a legion of characters and sub-plots, this is a swordplay film that was designed to test the concentration of the genre cognoscenti while leaving any newcomers in a state of mental turmoil. It’s very much the kind of production where we regularly see two characters deep in conversation when a third leaps into the scene and an extended bout of swordsmanship ensues. Alternatively there are numerous scenes of cackling clan leaders bickering over whose special move is the scariest – extend either idea over 100 minutes and it’s easy to see how uninvolving the production becomes.

It may descend into an inaccessible martial arts soap opera, but if nothing else it starts promisingly. Skipping past a lengthy, though necessary, voice over that explains the context of our story, ‘Heaven Sword And Dragon Sabre’ opens with a classic genre conceit; a vengeance-seeking hero whose skills do not match his obsessions. The narrative also gives the hero the further handicap of having to contend with a terminal illness due to an earlier injury, a technique that makes his later triumph all the more enjoyable. These early scenes are enjoyable as Chang Wu Ji wanders into the vast martial world and tries to discover which of the people he meets is friend and which is foe – thanks to the appealing Derek Yee, the viewer shares the hero’s voyage of discovery. Unfortunately, due to the inherent difficulty of trying to condense an epic work of fiction into two 100 minute features, it isn’t long before the viewer is deluged with information and background detail.

‘Heaven Sword And Dragon Sabre’ produces moments of interest and displays Chor Yuen’s visual flair, an asset to nearly every film he has lensed. Nevertheless, it is difficult for these isolated incidents to amount to anything more than just minimal interest. The director has taken complicated source material and distilled it into something arresting before, but here he finds too many sub-plots to balance and too many characters to accommodate. That his work is infinitely more watchable than Wong Jing’s take on the same material, ‘Kung-Fu Cult Hero’, is feint praise as this lacks the hook that is needed to keep the viewer on board through all of the plot machinations. The closing few minutes feature a brief over-view of the direct sequel, but sitting through another 100 minutes of similar complexities is never going to be that enticing.