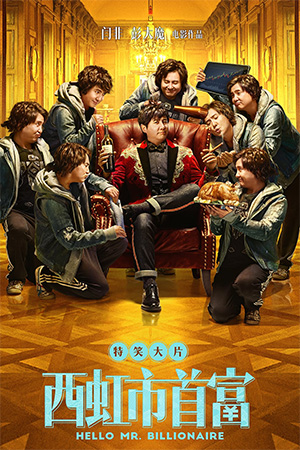 Chinese league goalkeeper Wang Duo Yu is one of life’s perennial losers. His career is failing, his love-life is non-existent and the future is looking bleak. Things take a drastic change when he finds out that a long forgotten relative has left him a significant windfall – but there’s a significant catch. To help him appreciate the meaning of money, Wang is tasked with spending a one billion yuan within a thirty day period; he must have no assets to show for it at the end of the period. If he succeeds, he inherits his uncle’s thirty billion yuan estate, but if he fails he returns to his hopeless existence without a penny to his name. The race is on for Wang to find new and inventive ways of spending a small fortune.

The 1902 novel ‘Brewster’s Millions’ – famously brought to the screen by Walter Hill in 1985 with Richard Pryor in the lead role – is given the Chinese remake treatment. And it’s such a good concept that very little has changed from the 80s incarnation with Pryor’s love of baseball turned into Shen Ten’s love of football (the proper stuff). The lavish spending exploits are all there as are some of the sub-plots from the predecessor including the nefarious schemes by certain parties to make sure he fails.

The problem with ‘Hello Mr. Billionaire’ is that it simply isn’t as well put together as the 1985 hit. In the past it might have been easy to use budgetary constraints to excuse Chinese productions not being up to the standard as their inspiration. Now, though, the amount of money spent on local productions has significantly increased, allowing for a much slicker affair. Yet while Walter Hill’s film keeps the plot moving until the very last scene, ‘Hello Mr. Billionaire’ gives up twenty minutes before the end. The tension of whether our hero will spend the money disappears and an interminable amount of time is spent on an over long football match between Wang’s team and a Chinese Premier team. The urgency is lost and the key component for the film to succeed simply disappears. It smacks of lazy, unfocused film-making.

While it runs out of steam far sooner than it should have done, ‘Hello Mr. Billionaire’ does offer a few smiles along the way. Not meaty guffaws mind, just smirks of mild amusement. It might be that the humour is very parochial or culturally specific. Whatever the reason, ‘Hello Mr. Billionaire’ is a pleasant flick with a suitably appealing protagonist. It just doesn’t leave much of a memory behind as the credits roll.