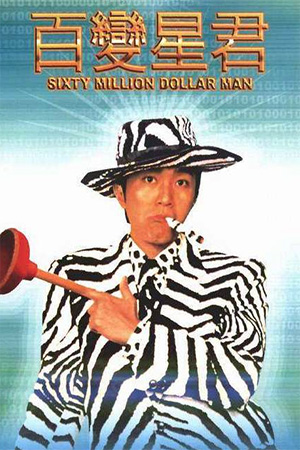 Lee (Stephen Chow) is the son of a very rich man.  At school he is cruel to all the other children and is lazy during class because his father owns the school.  A visit from the gorgeous girl next door causes problems when she turns out to be the wife of an important Japanese Triad.  Lee witnesses a murder and men are dispatched to kill him.  He is seriously injured when the Triads blow up his house and only his brain and lips remain.   There is only one hope; the mad professor at the school can make him a new body for $60 million.  Combined with a new computer chip that allows him to mould his body into anything, Lee sets out to take revenge.

‘Sixty Million Dollar Man’ is Wong Jing’s attempt at making a Hong Kong equivalent of ‘The Mask’. Sadly though, the incredibly bizarre and disjointed plot is far too baffling to be enjoyable and the assembled cast of usually reliable performers are wasted on very simple slapstick routines. Perhaps worst of all though, is the fact that the pivotal concept of a morphing man is barely used and I can only really recall one mildly amusing sequence involving a toilet (toilet humour, you might say?).

While the idea may have been a promising one, ‘Sixty Million Dollar Man’ remains a lazy and disappointingly unfunny outing for all concerned. Perhaps with a little more time and attention it may have succeeded, but it looks like Wong Jing’s insatiable appetite for a quick buck strikes again.