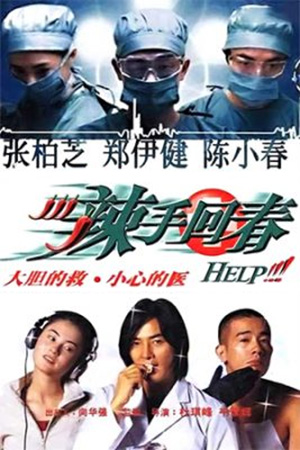 Johnnie To reminded audiences of his eclectic directorial nature with satirical comedy ‘Help!!!’, once again from the ‘Milkyway’ stable. This, though, proved to be a film that sharply divided critics and viewers alike, such is its complete opposition to most of the studio’s out put of the time. Whether it deserves its critical mauling will be questioned later.

A patient is admitted to the Sir Kau Kei Ho Hospital with severe burns and suffers the callous apathy of this bureaucratic institution. Ironically though, the patient is revealed to be the very Sir Kau Kei Ho whose name adorns the hospital. Ignoring the endless sycophants who attempt to curry favour with him, Sir Kau Kei Ho instead enlists the help of naive junior doctor Yan (Cheung) in his attempt to rejuvenate the hospital. Yan is well aware of the obvious lack of interest that most of the doctors show and so she tries to persuade one of her colleagues to start caring again. Her plea for her colleague, Jim (Chan), to change back to the super-charged doctor he once was succeeds and the pair then manage to convince Jim’s former partner, Joe (Cheng), to return. The trio invest all of their time and effort into reforming the way the hospital works, gradually making an impression on the other staff along the way. However, the shadowy bureaucrats who run the establishment from the mysterious, top-floor offices decide that the revolution must stop and thus use everything in their power to achieve their sinister goal.

Hong Kong comedies are not known for their satirical edge, but ‘Help!!!’ shows that such a difficult and culturally-restricted form of humour can truly succeed. This is a particularly corrosive satire which uses a Python-esque surrealism to add further bite to an already significant quota of incisive attacks on bureaucracy and the apathy that eats away at people who should care. Subtlety is not the film’s strong point and so it can be easy to dismiss the tone as ‘over-the-top’, but there’s a great deal to offer within To/Kai Fai’s comedy. The ensemble cast are excellent with Jordan Chan and surprisingly Ekin Cheng managing to enhance a quality production.

One of the achievements that ‘Help!!!’ pulls off is the adaptability of its message; although a sardonic look at a Hong Kong problem, it can easily be appreciated in connection to the N.H.S. or any other worldwide version of it. It therefore proves to be more accessible than its synopsis indicates. Not a Brunel intellectual challenge, this is a recommended satirical comedy, easy to enjoy and a feather in the cap of Johnnie To’s varied filmography.