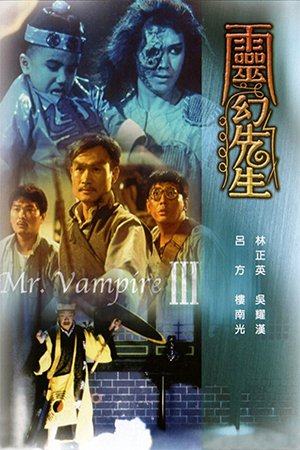 After the lacklustre sequel to the classic ‘Mr. Vampire’, I had fairly low expectations going into this instalment. Fortunately, Ricky Lau clearly went back to the original to see what made it so effective and has created a far more faithful sequel here.

The problem with part 2 was mainly the modern setting and the minimal convergence between the 2 disparate storylines. However, in this addition to the series we go back to a period setting and focus purely on the one adventure. Lam Ching-Ying has again reprised his role as the titular Mr. Vampire and is as assured as ever. His screen presence is excellent as always, and cleverly strikes a balance between playing it straight but not taking things too seriously. The main enemy on this occasion is not a Vampire, but a Witch played brilliantly by Wong Yuk Waan. Richard Ng provides comic relief as a bumbling Taoist priest aided by 2 ghosts, whom he uses to scare people into hiring him. He inadvertently joins forces with Lam and his students to fight the Witch, and is as reliable as ever getting plenty of dialogue, screen time and the bulk of comedy moments.

As mentioned, this film is far more similar to the original, and as a result is a more enjoyable experience than the disappointing part 2. However, it still fails to recreate much of the magic that made the original such a fan favourite. As expected, it is less fresh, but it also feels a little rushed, and none of the characters are particularly well developed. Perhaps the director felt we all knew what to expect, but making the audience care about the characters’ fate is an important ingredient in films such as this.

Overall, this is a worthy purchase for fans of the genre, and the minimal action is well handled and true to the spirit of the genre. As ever, Lam Ching-Ying steals the show and reminds us all what an underrated performer he was.