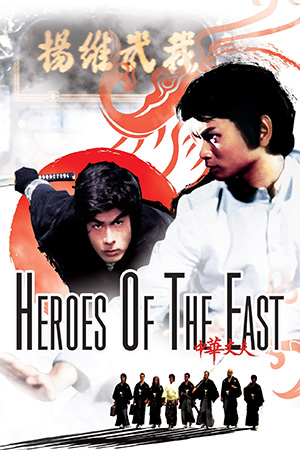 There’s a long cinematic tradition of Japanese villainy in Hong Kong film-making. Famous productions like ‘Fist Of Fury’ and ‘One-Armed Boxer’, not to mention scores of lesser kung fu flicks, have all exploited the stereotyped image of the evil, cackling Japanese tyrant. It’s little surprise that, when the usual image of this is changed, martial arts director par excellence Liu Chia-Liang has a significant hand in it. After taking the generic conventions and altering them so often before, Liang once again conjures up a fresh classic from a seemingly ordinary root.

A wealthy Chinese man (Liu Chia-Hui) is ‘persuaded’ by his family to marry a Japanese woman who he has never met in an arranged ceremony. After initial annoyance he finally meets her and, when enchanted by her beauty, happily goes along with the marriage. Wedded life starts off well for the newlyweds and there appears to be no clash of culture between them. Unfortunately the status quo is unsettled when the man objects to the harsh and aggressive martial arts style that his wife passionately practices. During their argument about which country has the better martial arts, the wife is soundly beaten in a sparring match and travels back to Japan. Persuaded to send a letter explaining the roots of all martial arts, the jilted husband is shocked to find that his good intentions have been misconstrued as a challenge to the Japanese. A team of Japanese fighters – masters of different disciplines – therefore arrive at the home of their perceived threat and decide to prove once and for all whose martial arts are better, China’s or Japan’s.

From a basic premise that is deceptively clever, Liu Chia-Liang crafts a martial arts film that is based on cultural misunderstanding rather than clichéd tensions. Liang makes sure that, although the Chinese kung fu styles gain victory eventually, the result is that both parties can better appreciate each other’s roots. With such a subtle yet effective conclusion to the film, Liang manages to turn the usual misconceptions on their head and add another outstanding production to the genre. In addition to this wonderful touch, this is perhaps the only kung-fu film where nobody is seriously hurt let alone killed, even though the action is spellbinding. These two notable plus points again remind all that Liu Chia-Liang is a criminally underrated auteur. Gordon Liu Chia-Hui enjoys a more relaxed lead role than usual as the troubled husband, but still demonstrates immense skill in the varied bouts. Whether it be with tonfa or traditional Chinese sword, Hui is assured and captivating.

‘Heroes Of The East’ starts relatively slowly, but when the storyline develops beyond the basic exposition, this is another kung fu treat from ‘The Pops’.