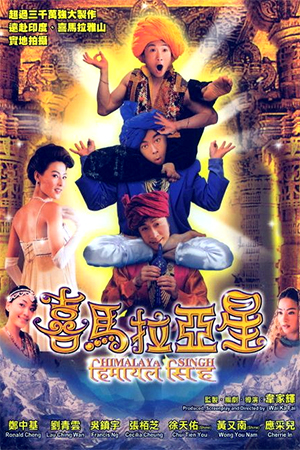 After not only enchanting audiences with the glorious ‘Fantasia’, but also playing no small part in the current renewal of interest in the Hui brothers films, Wai Ka Fai returns with another New Year extravagance. ‘Himalaya Singh’ attempts to capture lightning in a bottle again, reuniting most of the cast of last year’s box-office smash and employing an even greater preoccupation for the grandiose. To say that ‘Himalaya Singh’ is not in the same league as ‘Fantasia’ though is a bit like the obvious disparity in comparing the elegance of AC Milan with the marauding crudeness of a particularly barbaric Sunday pub team.

Singh (Ronald Cheng) reaches an advanced stage of enlightenment in his distant Himalayan retreat. His guardians, and fellow recluses, send him down to Yoga City to find the woman he is betrothed to, India Beauty, and learn more about the wider world. As Singh sets out on his journey, his naive outlook is immediately noticed by beautiful, yet unscrupulous Tally (Ying) who is keen to upset the future happiness of her rival India Beauty. Tally takes Singh under her dubious wing and starts to change him from wide-eyed innocent to arrogant thug, all in an attempt to satisfy her jealousy. Meanwhile three visitors to India (Lau Ching Wan and Shine) encounter a variety of con-artists and opportunists who manage to turn the uncle into a semi-dazed wanderer and the nephews into complete amnesiacs. While the uncle has great difficulty distinguishing between reality and the strange hallucinations that plague him, the youngsters start to follow a fellow victim (Ng) of local conmen in the mistake belief that he is their father. These various strangers find their lives inter-woven when Indian Beauty holds a contest to find a husband, with all of the participants eager to succeed.

It’s astonishing when one considers just how vast the gulf in quality is between ‘Himalaya Singh’ and ‘Fantasia’. Last year, audiences were wowed and critics mostly bowled over by ‘Fantasia’, a comic cornucopia that was brimming with wit and effective homage to the Hui brothers. ‘Himalaya Singh’ is, by contrast, a tirade of tiresome extended sketches and desperate humour that attempts to bludgeon the viewer into a state of dazed conformity. Eventually, after 90 minutes stagger past with the sophistication of a headbutting contest, the initial indifference turns to maddening frustration.

The luscious setting – easily the films greatest asset – is evidence that money was lavished on this production, but precious few cents seem to have splashed in the general direction of the screenplay. The story is slight, stretching the bumbling buffooneries of a cast of uninteresting characters into a full length feature, something that is a reminder of the very worst conventions that Hong Kong cinema can be guilty of. The forced brand of humour – filled, as it is, with hammy grimaces and gurning – is unrelenting in its banality, turning seasoned performers such as Lau Ching Wan and Francis Ng into unappealing puppets. For a supposed comedy, this latter flaw is especially hard to stomach.

In terms of characterisation (if that isn’t too optimistic a word) ‘Himalaya Singh’ is peppered with the age old problems that lesser Hong Kong comedies have often been saddled with. Cherrie Ying plays the ubiquitous waif who, in films of this nature, spends the first 80 minutes treating the hero dreadfully only to fall in love at the last moment. As the viewer we are meant to forgive all of her selfish atrocities towards Singh and actually feel moved by her closing admissions of love towards him. Such a ridiculous plot device has scuppered more than a few similar such comedies. Lau Ching Wan and Francis Ng both overact to within an inch of their lives, the former coming across like a poor Mr. Bean take-off while the latter just flails his arms around wildly. To turn two of Hong Kong’s finest actors into the blubbering idiots they play here should be made a capital offense punishable by beheading.

If Wai Ka Fai’s criminal misuse of his cast and location doesn’t rile most viewers, the appalling CGI will. ‘Fantasia’ used a few moments of computer trickery which, while reasonably well integrated, still proved to be the weakest component of an otherwise superb film. ‘Himalaya Singh’ is never so sparing though and the actual quality of the effects are considerably worse than its predecessor; it seems as if every other scene has some incongruous use of poorly rendered CGI, turning an already floundering production into a near disaster. The advancements in computer effects have made Hollywood film-makers lazy, but the rest of the world is in no better position. At least Hollywood can mostly call on superior special effects rather than the bottom-of-the-barrel, ZX Spectrum variety we’re faced with here.

Hong Kong appears to be awash with directors who can switch from grand achievements to miserable productions. James Yuen’s excellent ‘Crazy N’ The City’ was a stark contrast to the director’s earlier abomination, ‘My Wife Is 18’, while Dante Lam also has a disturbing unpredictability that makes every new film a risk to potential viewers. Wai Ka Fai has now joined this debatable list of film-makers. ‘Himalaya Singh’ is a depressing fusion of noise and colour that Hong Kong cinema can ill-afford to keep churning out. With the local market still struggling, it can no longer tolerate such costly catastrophes.