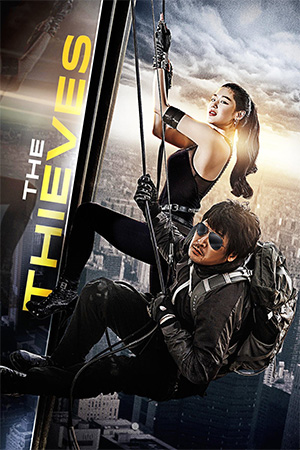 A team of Korean thieves headed by Popeye (Lee Jung Jae) look to pull off that one big job that will change all of their lives. The target: a gem worth $20million that is housed in a safe at a Macau casino. To complete the job, the Koreans must team up with their Chinese counterparts who are led by suave Chen, but friction is created with the return of Macao Park as the heist mastermind, a famed thief who double-crossed Popeye years prior. The job seems to go without a hitch, yet the owner of the diamond, the mysterious kingpin Wei Hung, is one step ahead of the bi-national alliance and starts to work his way through the thieves with brutal efficiency.

If ever there was a film to prove that box-office dollars (or Won in this case) are not an accurate arbiter of quality it is Choi Dong Hun’s ‘The Thieves’. Recently heralded as the second most successful local film of all time in Korea, ‘The Thieves’ is the kind of bloated, star-studded jolly up that you may have been mistaken for thinking that Hollywood had copyrighted. Like the annoyingly smug and utterly moribund ‘Ocean’s Twelve’, this is like watching two hours of celebrity pals enjoying themselves at the expense of your dwindling time.

‘The Thieves’ success could be down to a cast that brings local idol Jeon Ji-Hyun back from her Hollywood hiatus, teams her with ‘Il Mare’ co-star Lee Jung Jae and Hong Kong star Simon Yam and sends them to various beautiful locations. It seems a flaw in humanity that watching beautiful people in fast shiny cars and swaggering around with designer labels in luxury locations has become such a global obsession. Escapism is at the root of most cinema and there should be no snobbery towards that, but when it is as cynically packaged and orchestrated (complete with product placements galore) it is difficult not to fall under a deep melancholy.

Of course, with enough money thrown at the production some of the gloss is bound to impress and a few of the action sequences are a forgiveable distraction; the scene that features various heroes and villains bouncing off the side of a block of flats as they abseil down and come to blows is handled particularly well. Yet it would appear that viewers do not require a single character they can have a single iota of sympathy for – fine if you’re Lars Von Trier and you want to make some kind of ‘statement’ film. For entertainment though, this reviewer is asking for a little more.