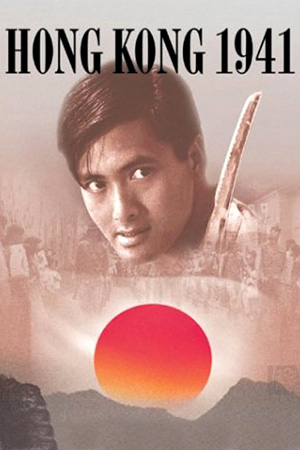 With his huge success in ‘Crouching Tiger, Hidden Dragon’, Chow Yun Fat seems to have finally made the precarious leap from cult actor (in the west) to genuine star of the near future. Of course, Hong Kong film fans have long held the screen legend in high esteem and he still commands sizeable chunks of tabloid space in the local press even though he is currently concentrating his efforts on Hollywood. Some who are just noticing the ability of Chow Yun Fat through his current popularity are digging into his back-catalogue and naturally picking out the very famous collaborations with John Woo – a director who has made the transition to Hollywood supremo within the space of a few films. However, it is certainly to be noted that, for a real appreciation of Chow Yun Fat’s abilities, the prospective viewer needs to also look outside of the John Woo and even Ringo Lam connections. ‘Hong Kong 1941’ is a film that deserves the same attention as some of Chow’s more widely known performances and is further proof that his acting prowess didn’t just start with ‘A Better Tomorrow’.

Chow plays a wanderer who arrives in Hong Kong after journeying down from the north and finding access out of the troubled country impossible. Hong Kong is in a state of civil unrest and the tensions are further heightened when the Japanese do actually invade and enforce their cruel grip on the land. Within this chaos, Chow befriends a local coolie (Man) after an initial misunderstanding and the two decide that their best chance of surviving the surrounding turmoil is to stick together. This new found friendship is put under analysis when the pair both fall in love with a terminally ill girl (Yip) who values both of their attention. Whatever discomfort this at first brings is soon pushed to one side as the trio form a strong bond and manage to scrape together a reasonable day to day existence. So far, the chaos has rumbled under the surface and the Japanese, although having invaded, have not gained full control of the town. This havoc explodes when the Japanese exert their influence on the locals and all are forced to kowtow to these vicious oppressors. Chow perceives that the only way to get out of this hellish environment is to work for the Japanese and hope that his constant submission will gain him the three passports he needs to get himself and his two friends out of Hong Kong. There soon comes a point, though, when Chow’s loyalties and his apparent co-operation under the Japanese yoke are severely tested and he realises that the three friends need to risk everything to escape the Hong Kong powderkeg.

‘Hong Kong 1941’ is a powerful and moving study of the effects of war on the ordinary person and the strains of such pressure on any friendship. The film’s strength is the way that the tension gradually builds up; the opening thirty minutes gives hints of the civil unrest, but also focuses on the innocent pleasures that the three friends enjoy together – then the real force of the film kicks in. This slow increase in the film’s power and the relative calm of the opening half-hour means that the closing twenty minutes is not only absorbing, but also nerve-jangling. Credit for this must go to director Leung Po-Chi who orchestrates this frightening depiction of 1941 Hong Kong with an immense amount of control and allows the characters to breathe within the narrative. Chow Yun Fat is excellent in the lead role, combining an inner-confidence with a real depth of sensitivity and Cecilia Yip garners audience sympathy in her difficult role. The main plaudit though should go to Alex Man who gives the performance of his career; it’s sad that in later years he would very rarely be given such a well-developed character to take control of. Man is all masculine bravado and exterior strength, but underneath the audience can clearly see the inner-pain he feels in the traumatic situations he finds himself in. This subtlety of character is one of the film’s strongest points and is yet another reason why this film deserves to be a definite recommendation. ‘Hong Kong 1941’ was critically acclaimed in its year of release and was nominated for numerous awards – the 17 years since it was made have done nothing to strip away the undoubted power of this film. Highly recommended.