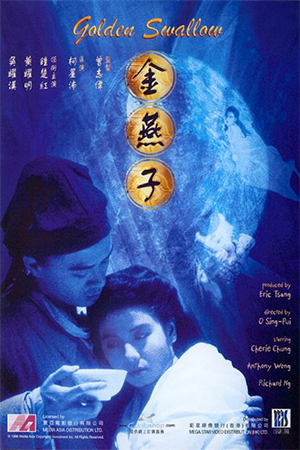 ‘Golden Swallow’ was released the same year as ‘A Chinese Ghost Story’ and demonstrates how quickly Hong Kong cinema will start a bandwagon (sometimes before a film is completed, which is why Jackie Chan’s pirate movie was given the baffling name ‘Project A’).  ‘Golden Swallow’, not to be confused with the 1968 Cheng Pei Pei film, is deeply indebted to ‘A Chinese Ghost Story’, even borrowing its art director Hai Chung-Man (thanks to Hong Kong Digital for the information).  More over, the plot is virtually a carbon copy, lifting all the major plot points and characters.

A naive business student Lao Chih-Chiu (singer Anthony Wong Yiu-Ming, not ‘The Untold Story’s Anthony Wong) rescues a swallow from a gang of malevolent children, unaware the swallow is actually a beautiful spirit, Hsiao Hsueh (Cherie Chung).  Unfortunately, Hsueh and her sister are forced to ensnare hapless men for their mistress, the vampiric Madam (Po) who freezes their bodies and feeds on the blood.

Hsueh persuades Madam to spare Chih-Chiu’s life, on the understanding he never reveal the secrets of the spiritual world.  Chih-Chiu is spat back out into the real world, robbed of his ghostly love.  But, he comes across Lu Hsiao-Ping (also Chung) a recently fatherless woman who forces herself on him.  Not recognising Hsiao-Ping as Hsueh, Chih-Chiu settles into domestic contentment, but a rash act and the reappearance of Madam threatens his family’s happiness.

Surprisingly ‘Golden Swallow’ is more than a cash-in.  Besides the tales of Pu Songling, writers Hiu Pang-Yau and Pin Kek-Cho draw inspiration from the legends of White Snake (filmed by Tsui Hark as ‘Green Snake’) and The Woman in the Snow (included in Masaki Kobayashi’s ‘Kwaidan’) with Chih-Chiu recalling his supernatural experience and unleashing the fury of the spiritual world.  The script also makes pointed remarks about the hidden power of women: Chih-Chiu is a business failure until Lu Hsiao-Ping rescues him with her acumen, while ghostbusting priests Left and Right Sword (Tsang and Ng) battle each other until she gives them a reason to focus their energies.  Comedy replacements for Wu Ma’s swordsman from ‘A Chinese Ghost Story’, Tsang and Ng are joined by a third swordsman, ‘Duel to the Death’s Norman Chu, who aids Chih-Chiu in the finale confrontation.

Hai’s art design, coupled with Henry Chan’s cinematography, presents a universe where the spiritual world is only one blue filter away from everyday life.  For the climax in Madam’s icy lair, Chan rejects the blue colour scheme for a contrast of deep blacks and whites and rich flesh colours that recall Corman’s Poe films or the work of Mario Bava.  Yuen Bun and Kuo Chui’s wirework action and pursuits through haunted forests are on par with ‘A Chinese Ghost Story’s, and effective use is made of Hsiao Hsueh’s white sashes (white being the Chinese colour for death); as the material captures her prey there is never any doubt these flimsy strips of silk are formidable weapons, even if Chung’s stunt double is clearly visible in some shots.

Anthony Wong and Cherie Chung have been criticised for lacking the same chemistry as Leslie Cheung and Joey Wong.  Wong does not have the charisma of Cheung, but Chung adeptly conveys both tragedy and menace, proving once more her talent is too often forgotten.  That Wong’s Chih-Chiu would not recognise Lu Hsiao-Ping as his spectral love requires the same suspension of disbelief that butt-kicking babes in men’s clothes will not be recognised as women.

The real problem is director O Sing-Pui’s failure to maintain a consistent tone.  Ching Siu Tung focused on the fleeting beauty and doomed nature of the romance, but O Sing-Pui cooks up a stew of heavy-handed comedy, eroticism, romance and horror to send everyone home happy; his visual direction is assured, his mastery of tone is lacking.  This is matched by eclectic music that sounds like a jukebox on random.

Despite this ‘Golden Swallow’ is ripe for reappraisal.