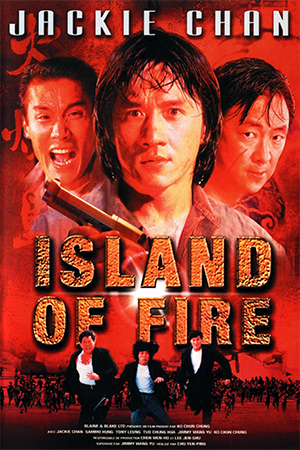 Originally (and more correctly) titled ‘Island On Fire’ to echo the titles of earlier Ringo Lam movies ‘Prison On Fire’ and ‘School On Fire’, Jimmy Wang Yu called upon numerous favours to bring together such an illustrious cast. Most notably Jackie Chan who appeared as a result of being helped out by Wang Yu earlier in his career when triads had threatened him during the making of ‘Dragon Lord’.

This film has been almost disowned by Jackie, as he hates it, probably due to the shocking finale, but this does not stop the film being entertaining or powerful despite its numerous flaws. The story appears (and was) hastily prepared which does not allow the narrative to flow smoothly and issues appear to be hastily glossed over. Each characters individual tale would probably have been enough to fill a movie by themselves, but the need to utilise each star actually works against the film by not linking them together well enough until the end, making it difficult for the audience to get fully involved.

Essentially a dark tale involving  a few desperate men, each incarcerated either harshly or unfairly, the characters themselves actually make you feel sorry for them, especially Sammo, and help the film reach out at more than the shallow level dramatic HK action movies often suffer from. The least amount of screen time is actually with Jackie, who is mostly there to provide a few short action sequences. Each was quickly put together but still impress more than other 90’s films such as ‘City Hunter’ or ‘Project S’ being more akin to the brutal style of ‘Crime Story’ than the graceful moves in ‘Drunken Master 2’.

Best performance, as is so often the case, goes to Sammo, who again shows his acting skills are far superior than he is credited for, fleshing out what would otherwise have been a shallow character. How often can he make you want to both laugh & cry in the same film? Obviously not to the same level as ‘Pedicab Driver’ or ‘Heart of Dragon’ he still brings true emotion to the screen.

For a low budget, rushed production, the emotional content of the film and the quality of its cast save the day providing us with a kung fu influenced ‘Shawshank Redemption’ wannabe. I would recommend this to anyone who wants to see Jackie in one of his rare serious performances, but also to those originally put off by bad reviews from the cast. It scrapes into the 4 star category due to its decent action and Sammo’s powerful performance.