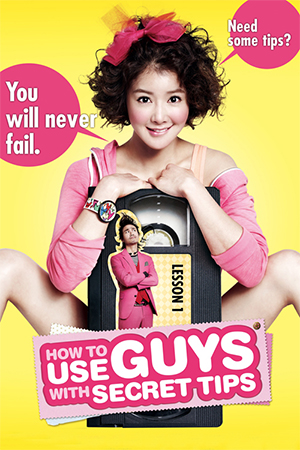 Choi Bo-Na is a diffident and severely put-upon assistant at an advertising agency who sees others around her getting the promotions while she toils away in relative anonymity. Her latest task is to look after new idol Lee Seung-Jae, a preening, self-important actor who is milking his fame for all it is worth. After a particularly stressful day with the prima donna star, Choi is stuck in the hinterland and forced to find her own way back to Seoul. Before she does though, the young shrinking violet happens upon an odd book stall selling self-help books run by an especially persuasive salesman (Park Young-Gyu).

Choi returns home with a set of expensive manuals called ‘How To Use Guys With Secret Tips’ and half-heartedly watches the first video in the series. Yet when she puts a few of these ‘secrets’ into action she suddenly discovers she has a strange power over men. Soon even arrogant Lee Seung-Jae is under her thrall and her skills are noticed by her employers.

Lee Won-Suk writes and directs this breezy film that is part rom-com and part satire of Korean pop culture. Despite this being his debut feature, Lee Won-Suk gives ‘How To Use Guys With Secret Tips’ an assured, polished finish that sits well with its contemporaries. These kind of films – invariably Korean – where the leading man/lady is initially so obnoxious only to become charming by the close of the story are heavily reliant on the charm of its stars; ‘How To Use Guys With Secret Tips’ has that quality in ample supply.

As always, this reviewer is amazed as to how a cheery, mostly sweet little rom-com can be stretched to just shy of 110 minutes. It’s a falling of so many Korean films to think viewers want extended running times with obvious padding rather than concluding the narrative in a snappy manner. ‘How To Use Guys With Secret Tips’ does crawl towards its finale with needless clichés being brought into play. Nevertheless, the production has enough genuine laughs, sharp satirical swipes and overall skill to be rated as recommended viewing.