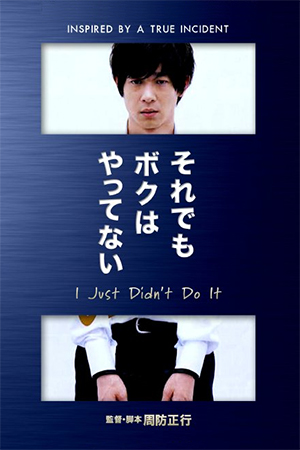 Masayuki Suo returned to Japanese cinemas in 2006 a full decade after the glorious success of ‘Shall We Dance’. During this time away from the screen, the auteur has seen his critically-lauded, box-office smash given the Hollywood remake treatment while during the latter half of his hiatus he has researched – in some depth apparently – Japan’s judicial system. All of this led to ‘I Just Didn’t Do It’, a scathing attack on what Suo sees as an antiquated and inherently flawed trial procedure.

The film begins with a lecherous businessman fondling a woman on a crowded Japanese train. Despite her obvious protestations, he continues, but is caught when the train stops and subsequently take away by the police. Once in the station, the antagonist, though professing his innocence, is presumed guilty by the prosecuting officer and told that a prison sentence awaits if he doesn’t confess. With the shame of his family and employers finding out used as bait, he stops, turns his pleas to ones of guilt and, after some cowardly begging to the stoic inquisitors, is given a relatively meagre fine.

The system, in this instance cut-and-dry, is called into question when Teppei, a young man on his way to a job interview, is accused of the same crime. Marched off by the station security, Teppei sees the one woman who insisted on his innocence ignored and the police involved in the proceedings. Taken into custody, Teppei is given the same choice as the previous suspect: confess – incurring a small fine – or claim innocence and await the inevitable sentence that the judge will give. With a 99% conviction rate, the pressure is on Teppei to yield the authorities, but he remains adamant that he is not guilty and the whole incident is a miscarriage of justice waiting to happen. What follows is a torrid ordeal where finding a lawyer willing to believe his innocence and agree to take on his case is only the start of the tribulations. Every facet of his personal life is used as a stick to beat him with in court, while the judge – who has the absolute decision on the defendant’s fate – has already made up his mind before the case has even been heard.

‘I Just Didn’t Do It’ is far removed from the star-studded, Grisham-inspired blockbusters where a slick young rookie lawyer takes apart his opponents with a bravura display of tub-thumping rhetoric. Even the alleged incident would barely make it into an episode of ‘Judge Judy’ yet alone persuade Hollywood moguls to put their bucks behind it. But Masayuki Suo’s return to Japanese cinema is so assuredly put together, so expertly developed that two hours left with the director’s work is an absorbing experience.

Little is initially known about Teppei and his innocence is therefore open to question. The obvious juxtaposition of the guilty man cravenly begging the police for clemency is intended to show just how unbalanced the lead protagonist’s situation is. The real skill of the director is the way he not only allows time to be afforded to Teppei’s characterisation and subsequently history, but how he also manoeuvres others into the story to support his quest for justice. As we gradually learn of his innocence, we also get a not-too-favourable insight into the Japanese legal system. Not that Suo uses the whole of his two hours as a way of preaching his particular indictment: the film is much more than just a lecture for the uninitiated, acting as a partial history for non-Japanese viewers while also cranking up the tension considerably. The director shows that it is not the ‘crime’ that is the focus – as is often the case in the glossy flicks previously alluded to – it is the execution of the battle of wills that ensues.

As with so much of Suo’s successful ensemble films, the cast is adeptly assembled with Ryo Kase being the obvious recipient of plaudits for his portrayal of the beleaguered Teppei. What is so involving about ‘I Just Didn’t Do It’ is the growth of his character from faceless innocent to the determined fighter unwilling to take the easy way out and consequently besmirch his name. Masako Motai also requires attention as the mother who is first of all doubtful of her son’s virtue, yet becomes a crusader for his rights when the odds are stacked against them.

Masayuki Suo has proven, if such proof was needed, that his ability isn’t just with underdog comedies. Suo can craft works that move the mind and the heart while entrancing the viewer along the way. Whatever he has in mind for his next project, I, among so many others, will be waiting eagerly.