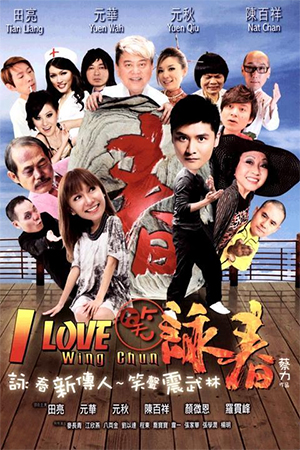 If you are forced to choose between having baby aardvarks erupt from your chest and squandering ninety minutes of your valuable time on ‘I Love Wing Chun’, read the rest of this review before you choose the seemingly cushy latter. A Sisyphean ordeal that would make Dante light-headed with sweaty fear, this is the film that may well warrant a re-appraisal of the word ‘bad’.

And so hold your love ones close to yourself as you experience synaptic suicide during this comedy about a hopeless employee charged with locating his boss’ long-lost son. Living with his uncle and auntie (Yuen Wah & Yuen Qiu in their 812th big screen pairing), the lost heir has developed into a biscuit-loving simpleton with an aptitude for Wing Chun – an irritating allusion to the far superior savant character Do San from ‘God of Gamblers’. On their way back to the big city to reunite the separated family members, the assorted characters – who range from the bone-grindingly annoying to those who are slightly less appealing – end up in a Wing Chun obsessed town with ‘hilarious consequences’.

A film that makes the very weakest of Wong Jing’s comedies look like ‘A Day At The Races’, ‘I Love Wing Chun’ is an excruciating excuse to take whatever is currently big in Asian pop culture and reference it, imagining that simply doing so is the height of wit. It’s also hard to feel anything but mild contempt for any of the performers, each of whom contribute to this orgy of utter banality in their own unique way. A special mention should be reserved for: Yuen Wah and Yuen Qiu, who just recycle their ‘Kung Fu Hustle’ shtick for the umpteenth time, reinforcing the rules of diminishing returns tenfold; Tats Lau, Nat Chan and Bobby Yip, recidivists with an almost  sociopathic need to destroy humanity with their comedy cameos; all of the five main stars who I cannot even be bothered to name lest I waste any more of your time.

‘I Love Wing Chun’ is boiled tripe. If there should be any lingering breath in the viewer when watching this, the ubiquitous humorous mahjong scene about forty minutes in should be like a suffocating pillow held over their face. If a Bear Grylls type hero is still twitching through this, the never-ending sequence in the Wing Chun town should be the needed hemlock to dispose of them.

At last a film to have turned ‘unfunny’ into an almost Zen-like conundrum.