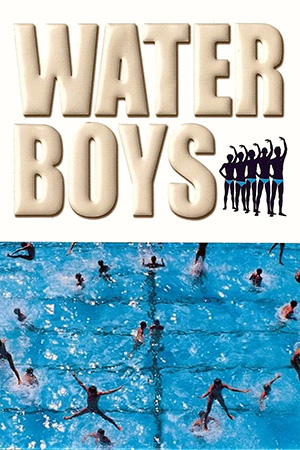 ‘Swing Girls’ bowled audiences over with its effortless charm and toe-tapping soundtrack, putting a smile on the face of this particular reviewer that lasted days. Director Shinobu Yaguchi had already experimented with the comedy staple of taking incongruous elements and fusing them together – as he did with the high school girls/big band jazz combination in ‘Swing Girls’ – in the cult hit ‘Waterboys’, this time mixing the adolescent Japanese male with the world of synchronised swimming. While it’s rougher round the edges than the streamlined follow-up, ‘Waterboys’ is another celebration of unbridled entertainment and character-based humour.

Keen swimmer and misfit Suzuki dreams of the adoration that the athletes at his school enjoy, but realises that his own abilities are a severe restriction to his ambitions. The opportunity to try something different emerges when a new teacher arrives in the school eager to start a boys’ synchronised swimming team and, due to her undoubted beauty, finds a horde of salivating pupils desperate to join the team. While time and the subsequent absence of the newcomer due to pregnancy leave mean that the planned synchronised swimming classes dwindle, Suzuki remains loyal to the concept. Alongside him are four fellow students and together they encounter all manner of derisory abuse from the rest of the school. Even when the swimming pool is made ‘out-of-bounds’ for Suzuki et al, they show the initiative to use their summer holiday to train by the sea. Under the tutelage of a crazed trainer at the local Sea World centre, the quintet prepare for the big school festival while still avoiding the mockery of all those close to them.

‘Waterboys’ is a riotous concoction of wildly infectious comedy and the old ‘show must go on’ edict, a tremendous fusion that nudges its predictability to one side and concentrates on making its popular concept work. Key to any such ambitions is having an effective ensemble of characters and, like ‘Swing Girls’, ‘Waterboys’ has a whole array of endearing players to warm to. Shinobu Yaguchi clearly knows how to turn clichés to his advantage and takes his team of lovable losers on a thoroughly entertaining series of misadventures.

Much of the hilarity of ‘Waterboys’ derives from the foibles of its hopeless heroes, the ludicrous situations they face and the character interactions throughout. Though much of these elements verge on the surreal, the director ensures that there are common features that any audience can relate to. The constant alienation that Suzuki and his friends encounter is a popular conceit for teen dramas, but ‘Waterboys’ has enough genuine pathos to direct our affections towards the protagonists rather than allow our natural cynicism to creep in.

Shinobu Yaguchi perfected the template set out in ‘Waterboys’ with the superior ‘Swing Girls’. Nonetheless, despite an unsteady start, this is a energetic comedy that grows in confidence as it progresses. Featuring a number of laugh-out-loud moments that undoubtedly transcend traditional language barriers, this is a heart-warming production that squeezes every last drop of entertainment value from its concept. Yaguchi blends some good comic performances with his own natural eye for the absurd and leaves viewers with something that should appeal to all ages and nationalities.