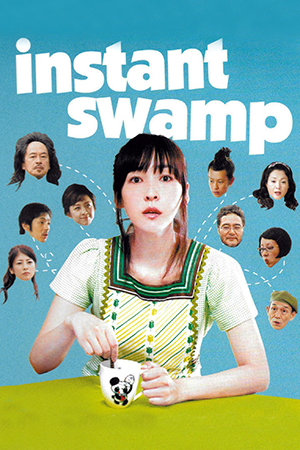 Satoshi Miki’s ‘Turtles Are Surprisingly Fast Swimmers’ was a fine example of how 100 minutes or so of Japanese absurdism can translate into a delightful work of cinema. The director’s latest, ‘Instant Swamp’, shows how a lack of control – even for films taking part in some bizarre ‘otherworld’ – can make the same formula difficult to digest.

Kumiko Aso plays the nutty heroine of the story Haname Jinchoge, a woman who feels her life has been cursed ever since she threw every gift she had received from her runaway father into a nearby swamp. Her work is unfulfilling and her home life with her equally eccentric mother is tetchy at the best of times. When her aforementioned mater is rushed to hospital after a strange accident, a weird chain of events is set off that ultimately leads to Haname discovering that the man who left home when she was eight was not her biological father. She eventually meets the unknown dad, an aged hippy who runs a very unlikely antiques shop, and gets to know him through a series of oddball adventures.

‘Instant Swamp’ is an acquired taste even for those of us who don’t mind increasingly eccentric characters screeching at each other in Japanese. A few early laughs are derived from the strangest comments you could expect to hear in a contemporary comedy (such as mother and daughter debating whether or not a certain politician is the spitting image of Antonin Dvorak) and an endlessly inventive collage of sight gags. Satoshi never lets his audience get comfortable or feel they can telegraph what’s about to happen; as soon as they feel the latter, a giant cuddly toy polar bear is thrown out of a Milanese window by a batty old crone. This is the kind of cosmos that Satoshi creates, a Japan where everyone – from the obsessive recycling officers to hapless nurses and punk electricians – seems to be completely off their rocker, to put it technically.

While five minutes in the company of Haname and company is enough to separate fans of surrealism from the mainstream, after two hours the former herd have effectively been culled as well. The problem is that while an endless stream of lunacy entertains for a short time, if it is without any real narrative to attach it to it eventually becomes tiresome. The best of this select genre, the Pythons and even the director’s other work, had a framework to keep all of these incredible ideas in place. ‘Instant Swamp’ is without such structure and descends into episodic zaniness for the sake of it. This turns the characters into rather uninteresting cartoons by the time the sixty minute mark is passed and there is still an hour to come.

Satoshi Miki is clearly blessed with an imagination that can fill any feature with scores of ideas and possibilities. This gift for the absurd is truly to be appreciated as few directors in global cinema are quite so willing to enter the mainstream with such an unbridled lunacy. Yet ‘Instant Swamp’ is lacking in contrasts to its weirdness, thus meaning that the surreal becomes ordinary and the film-maker becomes all the more desperate to surprise us, amounting to an unenviable amount of shouting and hollering (by the end I felt like AC/DC had taken up residency in the innermost reaches of my cranium). Bizarre for the sake of it just doesn’t work and without anything solid to juxtapose it with, ’Instant Swamp’s initial laughs soon wear thin.