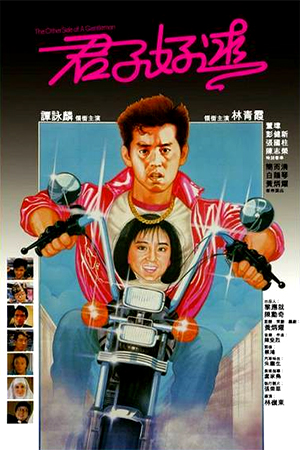 The course of true love never runs smoothly, but it crashes about hopelessly for 86 long minutes in this sophomoric Ringo Lam romantic misfire.  Those drawn by Lam or Brigitte Lin expecting a taut thriller are implored to steer clear.

Tam is Alan Ng, an apparent example of the amoral youth of today (today being the early eighties).  Not that Alan indulges in crime, drugs or assault; in fact he is merely a boorish Casanova with an unsuccessful track record.  But church folk and university psychology professors enlist fresh-faced undergraduate Jo Jo (Lin) to woo Alan then dump him, thereby teaching him social responsibility.  But, for reasons kept to herself Jo Jo begins to fall for Al, much to the chagrin of her professor fiancé.  There follows a tortuous and tortured series of lame comic set pieces and clumsy melodrama, culminating in a tragic-then-happy-ending so perverse it would make Romeo slap Juliet.

Lam later proved himself a minor master of suspense, but is adrift when tackling matters of the heart.  A hectoring tone veers between lame pratfalls and sub-Mills & Boon amorous histrionics, and Tam and Lin have all the spark of two wet fish rubbed together.

Lam’s indifference to ‘The Other Side of Gentleman’ is evident from his pedestrian direction, showing interest only in a brief, but impressively staged road accident that leads to that weird ending.  More offensive than Lam’s bland visuals is the eighties fashion the cast sport, looking like rejects from some abandoned ‘Flashdance’ sequel.  Alan works in a fashion store, and his climactic wedding day gate-crashing “I’m a pair of jeans, but you want me to be trousers” sermon is an all-time worst movie moment, even allowing for dodgy subtitling.

With all characters underwritten it seems churlish to criticise performances, but eighties Asian singing sensation Tam is a charisma vacuum and not even the legendary Lin can convince in her thankless damp squib of a role.  Hard to imagine Quentin Tarantino borrowing from this one.