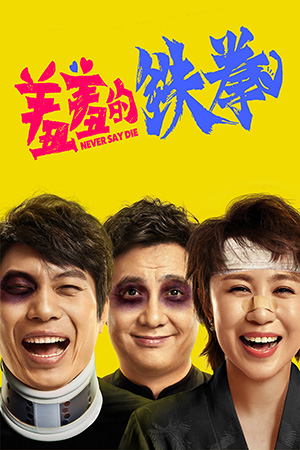 After the box office triumph of 2015’s ‘Goodbye Mr. Loser’, Chinese comedy troupe Mahua FunAge return to the big screen with ‘Never Say Die’, another play adapted from one of their stage plays.

Former ultimate fighting contender Edison has fallen on hard times after being accused of bribery three years before. Now eking a living from fixed bouts and low grade matches, Edison is given the chance to earn himself a tidy profit by his manager by taking a dive in the next match. Listening to their plan is crusading reporter Xiao who records the conversation and threatens to print the story in her newspaper. When Edison chases after her though, a freak accident causes the two to swap bodies, an event which leads to both of them ruining their respective careers. Yet hope comes in the form of Xiao’s cheating boyfriend and champion fighter who offers Edison a return bout after humiliating him years before. Initially uninterested, Xiao – in Edison’s body – is determined to accept the fight as revenge for her fiancee’s infidelity.

Mahua FunAge have become a major force in Chinese cinema, a fact that has now been cemented by the success of ‘Never Say Die’. Pulling in an astounding $250million plus on its home turf, ‘Never Say Die’ was one of the big stories of Chinese cinema in 2017. It swatted away significant Hollywood competition to achieve its figures and is a reminder of how popular something so ingrained in the local psyche can become with a good wind behind it.

As with all comedy – especially that which taps into local tastes and quirks – it is almost impossible for a non-native speaker to appreciate all of the nuances and in-jokes of the humour; it’s no coincidence that Stephen Chow’s worldwide popularity has come as he has moved away from Canto comedy that, while massive in Hong Kong, left many outside of those shores scratching their head. That said, even the most parochial comedy should offer a few laughs and it’s good to report that ‘Never Say Die’ contains its share of hearty laughs.

Much of the humour is slapstick, but that shouldn’t imply that Mahua FunAge’s style isn’t sophisticated. There is a solid mix of winning visual gags, one-liners and absurdism that makes ‘Never Say Die’ entertaining even for those of us who do not speak Mandarin. The pace is snappy, the wit apparent and the cast work seamlessly together; Mahua FunAge have been working together for over a decade and that harmony within the group comes across very well on screen. Allen Ai and Ma Li are a wonderful double act, playing off each other’s quirks with the confidence of a Chinese Laurel & Hardy.

‘Never Say Die’ would have had them rolling in the aisles in Beijing. It probably wont play that well outside of China nor does it have to; this is a film proud of the great tradition of comedy from the region. That said, there’s enough here to mean that ‘Never Say Die’ should appeal to even those who are usually baffled by Chinese comedy.