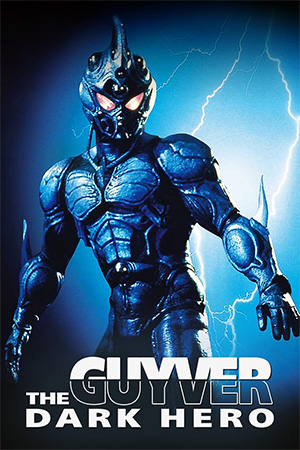 This follow up to the 1991 Mark Hamill vehicle ‘Guyver’ (aka ‘Mutronics’) is more of a cross between ‘Drive’ and ‘Power Rangers’ than a true homage to the original Japanese animation.

The similarities to ‘Drive’ (made 2 years later) are uncanny. Our hero has an implant, which gives him awesome fighting abilities, with super strength and speed but is searching for a way to rid himself of this ‘gift’. Following a series of hyper-kinetic battles, our hero faces off against a superior version of himself before eventually saving the day. It is also easy to see how an more violent adult version of Power Rangers would have looked had one ever been made thanks to the increasingly imaginative rubber costumes adorning the villains.

What saves this generally poor B-movie from complete obscurity are the numerous well crafted stunt and fight sequences scattered throughout the film. Most of them are short, and although are similar in style to other Alpha Stunts outings such as ‘Drive’, ‘Blade’ and ‘Wicked Game’ do not quite match up. However, the finale between the two ‘Guyver’s’ is incredibly well choreographed, and even more impressively executed by the stunt players under obviously heavy prosthetics.

Aside from the action (why worry about that!?) there is little on offer. It is clear that the budget was low, but put to maximum effect. Some of the set design is excellent, and the costumes, although cheesy, serve their purpose well. No thespian awards are likely to be handed out, but that’s not what this movie is about. Its an action movie, and as such delivers the goods.

I’ve said it before, and I’ll say it again: Koichi Sakamoto and his Alpha Stunts team are absolutely phenomenal, and deserve much greater credit. I’m sure they could provide much more satisfying fight sequences in Hollywood flicks than some of the HK choreographers currently being handsomely paid. Why the ‘undercranking king’ Donnie Yen was chosen to replace them as action director for the ‘Blade’ sequel is beyond me – I only hope he doesn’t let us down – Koichi wouldn’t.

As a side note of some interest, the lead actor – David Hayter – is quite a talent and may be familiar to some of you as the voice of both Snake from the Metal Gear Solid game, and Captain America in the U.S. Spiderman animated TV series. He also appeared as a Cop in the aforementioned ‘Drive’, and is a scriptwriter on the upcoming X-Men 2 and Hulk Comic book adaptations. He also often uses the pseudonym Sean Barker which was his character name in this film! Very unusual!