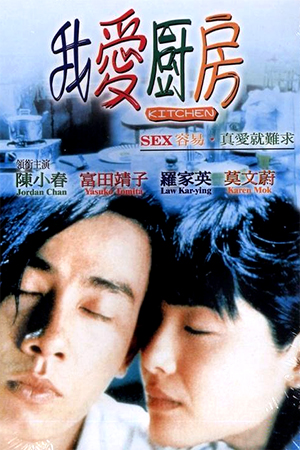 Jordan Chan enjoys an avid following throughout the West thanks to some eye-catching performances and his own inimitable style. ‘Kitchen’ is widely considered to feature one of his strongest displays and gives the star a chance to headline this romantic drama.

After her grandmother dies, young orphan Aggie stumbles away from the funeral service traumatised by her tremendous loss. Coming to her aid is unusual looking stranger Louis (Chan) who was also a friend of the deceased and works as a hairdresser in Hong Kong. Taking the distraught Aggie back to the flat he shares with his mother, Louis’ softer side is gradually revealed even though the new lodger still cannot speak. In the course of the next few days Aggie finally breaks her silence and thanks her friends for the patience they’ve shown with her. However, the relationship she shares with Louis is one neither understands, though his peculiar girlfriend doesn’t see it like that. Only after he suffers a bereavement do the pair feel comfortable with each other, but still they cannot express what they mean to one another.

Based on a cult novel, ‘Kitchen’ introduces an interesting premise that touches on popular Hong Kong themes i.e. unrequited love and the relationship between two of life’s shattered souls. With such a well-trod, yet effective path, it was reasonable to expect another powerful drama to challenge the heart and mind. Unfortunately, as good as some of the parts are, the whole fails to deliver its promise and once again falls foul of the ‘style over substance’ problem. Director Yim Ho has no difficulty in utilising the effective cinematography or creating an atmosphere apt for the drama. However, he stumbles in giving the film a real heart; even though the characters, especially Jordan Chan’s, the feeling that is defined early on does not last the duration. Instead of fleshing out the main players and giving them the three-dimensional qualities they need, Yim Ho relies on their idiosyncrasies and supposes that this makes them more human; Aggie, in particular, is introduced as an understandably traumatised woman, but then slips into ‘quirky’ mode soon after. In a film so reliant on two differing characters having sharing a love that is realistic, this is a major disappointment. There’s also ending after ending to contend with and the fact that a few chances to finish on a great closing moment are lost.

‘Kitchen’ is watchable, of course for Jordan Chan’s first-rate display, though it tends to languish in pretentiousness when a firmer hand would have been far more effective.