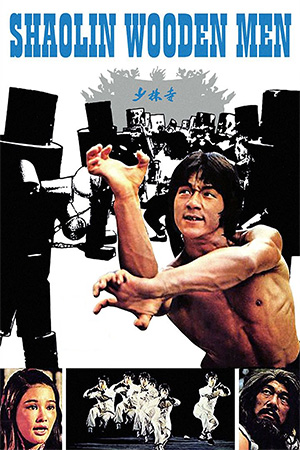 It’s a common misapprehension that Jackie Chan’s Lo Wei era produced nothing worth mentioning. Some feel that it was only with ‘Snake In The Eagle’s Shadow’ that Chan was finally able to take part in quality productions. However, he starred in three notable efforts during his days before superstardom, films that remain well worth watching. Although far removed from what many new Jackie Chan fans may be expecting, ‘Dragon Fist’, ‘Snake And Crane: Arts Of Shaolin’ and ‘Shaolin Wooden Men’ show that Chan’s years toiling for Lo Wei were by no means wasted.

‘Shaolin Wooden Men’ takes a very simple premise and immediately gives it a twist. Chan plays a young Shaolin student who has taken a vow of silence since seeing his parents killed by a masked assassin as a child. While in Shaolin, this aptly titled ‘Brother Mute’ toils away hoping to defeat the dreaded Wooden Men who bar the exit of all prospective fighters at the temple. This goal of leaving Shaolin to find his parents’ killer seems a long way off until he meets a mysterious prisoner who is being kept on the temple grounds. After the initial awkwardness, Brother Mute forms an unusual friendship with the stranger and agrees to steal food for him in exchange for kung-fu lessons. Gradually the young fighter learns advanced techniques from the haggard prisoner and is finally able to qualify for leaving Shaolin. Following a lengthy battle with the Wooden Men, Mute is allowed to leave the temple and begin his real quest. In the outside world he searches for any clues and comes to the aid of a local restaurant owner while fending off a town gang. Mute then meets his imprisoned teacher who has succeeded in escaping his detention cell and is ready to resume his shady dealings. It is only at this point that the naive avenger realises that his own teacher is the dreaded criminal Fut Yu and that he himself has played a part in the escape. A further twist means that master and student must face each other in a battle to reveal the truth about their individual motivations.

The storyline, although hardly original, is peppered with intriguing twists and an array of curious characters. This deviation from the expect path of the revenge plot is one of many reasons to watch ‘Shaolin Wooden Men’. It’s certainly not perfect and not among Jackie Chan’s best films, but there is ample entertainment value. The fight action – handled by choreographic supremo Tommy Lee – is fresh looking and really stands out when one considers that the film was made in 1977. Combining straight kung-fu skills with acrobatics and weapons battles, there is much to enjoy on a purely adrenalin-based level. Chan also gives a commanding performance as Brother Mute; although not speaking until the conclusion, he conveys emotion and anger with confident ability. Against him as the main antagonist is the stern veteran Kam Kong who once again shows why he makes such a powerful villain. ‘Shaolin Wooden Men’ is certainly not the best Chan has to offer, but it has plenty of compelling reasons to watch it.