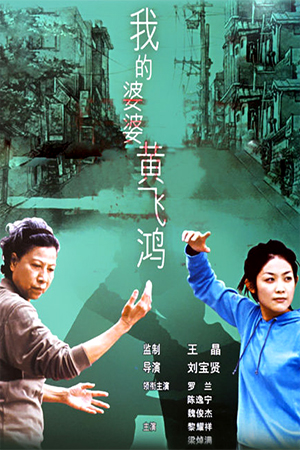 Troubled youth Gucci (Chan) constantly fights with her mother and has little time for her cantankerous grandmother, who is amusingly called Wong Fei Hung. Her standing with both of her relatives is hardly improved when Gucci finds herself consigned to a young offenders’ home after an altercation in a bar. While Gucci is working off her debt to society, her mother is tragically killed in a road accident and the grandmother is now her legal guardian. When Gucci is released, she is not only devastated to learn of her mother’s death, but is also shocked to discover that Wong Fei Hung is now in sole charge of her. It’s only natural that two such diverse characters are immediately at odds and, sure enough, there is friction between them throughout the first few weeks. Eventually, Gucci begins to see that her grandmother really cares for her and also sees how the neighbourhood in general views the venerable Wong Fei Hung.

With a title that implies some kind of dreadful spoof of the genre, ‘Kung Fu Master Is My Grandma!’ surprises the viewer by heading down the teen drama route and skilfully avoiding most of the moods insinuated by it’s name. Seemingly a television film, this modest budgeted little drama scores well with its impressive performances, but stumbles when the heavy-handed direction becomes more prominent.

Teen dramas – whether they be Asian or Western in design – are as old as the concept of ‘teenagers’ and all tend to follow a similar path. ‘Kung Fu Master Is My Grandma!’ is similar in construction to the usual clichéd storylines of redemption, with Gucci initially having the same spirit of rebellion within her, but finding common ground with her elders. Even though such ideas are in constant use, this drama handles the situations reasonably well, thanks largely to a good cast. The acting lifts the usual scenes of angst and anguish, giving the viewer the chance to be forgiving towards the underwritten sub-plots and melodrama. Helen Law, an actress who has made a career in the past decade of playing these irascible old codgers, is typically accomplished as she lends a certain professionalism to her role. Law’s handling of occasionally flat material is a reminder of the virtue of having a seasoned veteran in the cast of a production. Newcomer Isabel Chan is given a sympathetic character whose problems never alienate the viewer, therefore her performance is endearing and points to an interesting future for the young actress.

As capable as the performances are, they are unable to dilute the tepid nature of Bowie Lam’s direction. Owing more to the overwrought melodrama of U.S. TV movies, his direction allows moments of genuine pathos to get drowned in pure hysteria. When Gucci’s mother dies and the news is conveyed to the daughter, the overblown soundtrack completely destroys any real drama found in the situation. Lam also has the unfortunate habit of using ludicrously extended close-ups of his characters in the hope that their facial expressions will inject some emotion into the proceedings – all they do is betray the roots of this production.

‘Kung Fu Master Is My Grandma!’ offers very little in the way of action despite its title and allusions to Wong Fei Hung (amusingly, each of Helen Law’s friends in the film is named after one of Wong’s legendary cohorts). Nevertheless, in its own way it is quite a diverting drama that has its moments of chemistry between the two leads. It’s just unfortunate that the b-movie direction undermines the hard work of the cast.