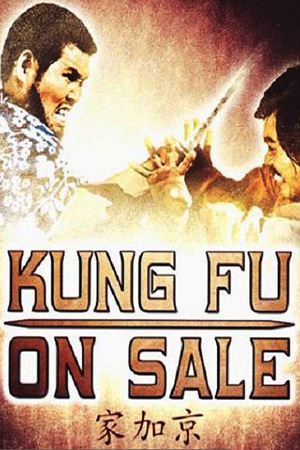 Perhaps I’m a glutton for punishment, watching yet another very average independent kung fu comedy. However, by reviewing such a film it may just save someone else’s money and help the kung fu comedy to retain a tiny ember of dignity. As I’ve often said, the difference between a ‘Drunken Master’ or a ‘Magnificent Butcher’ and one of these endless Taiwanese independents is the restraint of the humour; the aforementioned classics all added humour that had some relevance to the overall storyline rather than wedge in a series of tiresome comic routines to pad out the running time. The latter way of directing seems a suitable way of starting the review of ‘Kung Fu On Sale’.

Chiang Wu is desperate to learn kung fu, but cannot afford to pay for lessons at one of the many schools in town. Nevertheless, Wu tries to pick up what skills he can by observing others and spying on the secretive lessons of various clans. Such behaviour naturally brings him to the attention of the local ruffians and he has to endure a few beatings at their hands before he is saved by a superkicking stranger. Wu finds some allies in his quest when he befriends a quartet of beggars who help him raise money by demonstrating kung fu in the town. During a brawl that envelops the friends, the quartet come to the rescue of a cocky old man who decides to be Wu’s adoptive grandfather after they escape. When the old man discovers Wu’s desire to learn kung fu he persuades the young man to learn a few moves off him. However, these basic skills are still no match for the adversaries he faces and Chiang Wu must practice in earnest if he has any hope of beating a surprising foe.

The storyline is similar to the superior ‘Daggers 8’ and the inspiration of Jackie Chan’s Seasonal hit films is always very obvious. ‘Kung Fu On Sale’ is padded out with the kind of cliches that have always worked against the sub-genre’s credibility; the town thugs (why do they always travel around in threes?), the obligatory fight in a restaurant, the craggy master and the ‘comic’ interludes of the eccentric background characters are regurgitated yet again. The ever annoying Dean Shek makes his expected appearance to really kill off any chances this film has of being original and the tiresome direction that Su Chen Ping provides means that, even at 89 minutes, viewing is a chore. There is some solid action here – especially from Man Lee Pang (‘My Life’s On The Line’) – but much of this is undercranked. ‘Kung Fu On Sale’ is strictly for fans who absolutely must see every film the genre has to offer. The majority of viewers would be best advised looking elsewhere for entertainment.