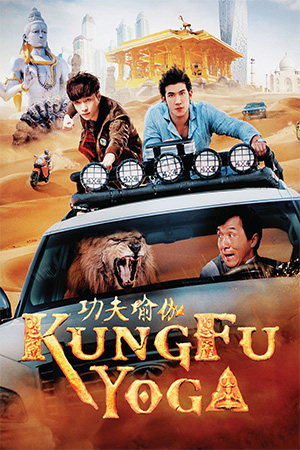 China’s best archaeologist, Jack (Chan), is approached by a beautiful Indian historian who brings a map that might lead to the famed Magadha treasure. Persuaded to make the journey to the suspected area that the treasure resides and backed by his assistants and the son of one of his oldest friends, Jack begins to explore the deep ice caves in Tibet. Although the team finds one of the most noted parts of the treasure their expedition is interrupted by Indian millionaire Randall (Sood) and his band of hired mercenaries who are also after the treasure. Jack and his colleagues escapes with his life, but is let down by his deceased friend’s son who steals the Magadha diamond, the key to finding the real historical bounty that has tantalised the East for hundreds of years. As the diamond shows up for auction in Dubai, Jack seeks the help of his wealthy backer to get the diamond and use it as a tool to uncover the truth behind the mysterious Magadha. Naturally the ruthless Randall and his team are also in pursuit and have few scruples in their way to get the incredible hoard.

When I first heard the title ‘Kung Fu Yoga’ I must confess that I had visions of Jackie Chan putting together a big budget remake of the slightly bizarre yet very entertaining Alan Hsu/Chien Yuet San film ‘Kung-Fu v. Yoga’. It isn’t. We’ll have to wait for Denis Villeneuve to finish the new ‘Blade Runner’ film before we can dream about that I suppose. ‘Kung Fu Yoga’ is actually ‘Armour of God-lite’, an action comedy that once again casts Jackie Chan as super-fighting treasure hunter though here his character leans more to the role of historian than anything else. The fact that it isn’t even as good as the insipid third part of the ‘Armour of God’ trilogy, ‘Chinese Zodiac’, should tell you everything you need to know about ‘Kung Fu Yoga’.

Jackie Chan has had a prolific year or so. First there was the bland though slightly diverting ‘Skiptrace’, then December 2016 saw the release of the patchy, but promising ‘Railroad Tigers’. ‘Kung Fu Yoga’, a massive hit during 2017 Chinese New Year, is by far the most frustrating and disappointing of the lot. Once again we have a Chinese film that is filled with ropey computer effects that are used for practically every scene. Quite why we needed a chase scene involving a lion in a car or our heroes escaping from a pack of hyenas is not clear; even if the CGI had been exceptional, the ideas are about as welcome as a gangrenous foot. It’s the current malaise of Chinese cinema, invested with absurd hubris, certain that throwing every effect at the screen will somehow translate to excitement.

While the blue screen effects and technical wizardry are found wanting, we should at least be able to enjoy a bit of Chan’s usual fisticuffs magic. Unfortunately, while Jackie does get the occasional moment to reel back the years, most of the running time features his uninspiring co-stars flailing their arms at each other and exaggerating every movement like they’re in a bad pantomime. As this is modern film-making of course the stars are photogenic especially the shimmering Patani who is awkwardly shoe-horned in as Chan’s on-off love interest. The days of physically proficient performers doing the action has long since passed though and Chan ends up rowing upstream against the tide to try and generate a little bit of interest.

‘Kung Fu Yoga’ fearlessly rips-off the Indiana Jones films with impunity. Sadly Stanley Tong didn’t realise that there is absolutely nothing of merit in ‘Kingdom of the Crystal Skull’ to aspire to and thinks that ugly effects and dull action inspired by said film will somehow make ‘Kung Fu Yoga’ enjoyable. It doesn’t. There is more excitement in one single frame of Jackie Chan and Stanley Tong’s previous films than in ‘Kung Fu Yoga’; even ‘The Myth’, another film that tried to bring Chan’s popularity to Indian audiences, had considerably more skill and imagination in it than this big-budget mess can muster. It gives me no pleasure to say that I would even consider, if heavily medicated, watching ‘The Spy Next Door’ again rather than this.