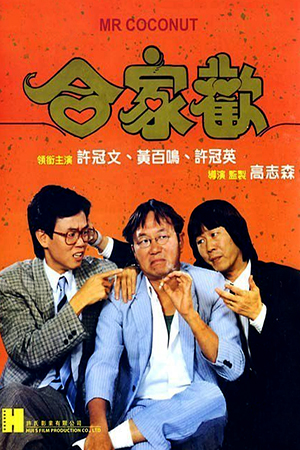 At the end of my review for ‘The Front Page’ I mentioned how I hoped that I would not have to wait too long before I could see ‘Mr. Coconut’ – a Michael Hui film that has proved to be the most elusive of his canon. Now, thanks to a series of re-releases courtesy of AVP video, the chance to catch up with a few of the comic master’s 80s hits is finally here, though the question is whether it has been worth the considerable wait.

A cult hero in his own region in Mainland China, ‘Mr. Coconut’ – so-called because of his proficiency in climbing the local coconut trees – decides to visit his sister in Hong Kong and sample some of the opulence that she apparently enjoys. When he arrives in the big city though, the country yokel discovers that the wonders of ‘civilisation’ seem to add to the stresses of life rather than ease them and his brother-in-law is working himself into an early grave in an attempt to live the capitalist ideal. The visitor’s uncouth behaviour also threatens to disrupt the family’s attempts at social climbing and a disastrous party forces a wedge between the Mainlander and the supposedly cultured Hong Kong relatives.

While ‘Mr. Coconut’ contains typical Hui-esque swipes at the daily drudgery of the working world, this is far removed from the masterpieces that pepper Michael Hui’s influential career. Clifton Ko’s film – and this is resolutely a Clifton Ko film despite Michael’s appearance in the lead role – is the kind of messy comedy that staggers from one set-piece to another with little clue as to what direction to ultimately follow. Unlike ‘The Front Page’, this is a release that does not justify it’s lengthy absence from DVD.

Obviously, the story tries to conclude with a grand resolution of the culture conflict, a moment when the boorish habits of the stranger are somehow shown to have value in a modernised environment. This simple idea has been the staple of films like ‘Crocodile Dundee’ and ‘Coming To America’, but ‘Mr. Coconut’ has too many inherent flaws to be able to pull off this gesture. The fundamental weakness is the ‘hero’ himself as he never seems sympathetic nor do his parochial ways ever appear quaint or charming. Instead he is the stereotyped Mainlander – dirty, dishonest and as obsessed by making a quick buck as his Hong Kong relations. Despite the consummate skill of Michael Hui, ‘Mr. Coconut’ is nothing more than a number of oafish quirks wrapped up in a bumbling exterior while his sister’s family are money-grabbing drones.

Clifton Ko’s direction adds to the frustrations with his restraining of Hui maddening; Ko prefers to let Michael toil away in unfunny, overstretched comic routines rather than allow his leading man’s natural abilities to shine through. When Ko senses that the pace is dragging, the narrative then takes a pointless detour to Africa complete with a very uncomfortable scene where the main character is confronted by an African general (played by a Chinese actor blacked-up!). Such needless plot-twists slow down a film that has a workable central premise yet simply squanders opportunities quicker than it creates them.

Michael Hui is, justifiably, one of the great icons of Hong Kong cinema. ‘Mr. Coconut’ is certainly not evidence of why this is the case though. Thrown together rather than constructed, this is a production where the director has little idea how to generate organic laughs from situations and must therefore shoe-horn them in. The presence of Michael Hui gives it an extra half star, but there’s little to commend otherwise.