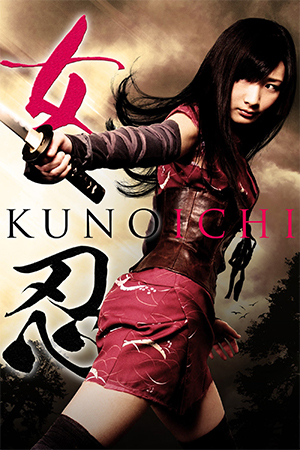 As the fierce rivalry between the Iga and Kouga ninja clans rages on, a pair of psychotic Iga ninjas are tasked with abducting young women to serve as “tools of pleasure”. Little do they realise though, that one of their latest victims is not only a kunoichi, a highly skilled female ninja, but also a woman on a mission of vengeance. Determined to smash the evil flesh trafficking heritage to which her own mother once fell victim, this beautiful, avenging angel of death is about to unleash her full fury.

Just in case the title didn’t give it away, ‘Kunoichi: Ninja Girl’ is yet another ninja-themed movie from Japanese director Seiji Chiba. Shot on a limited budget, the film understandably sports that hazy, TV movie look and is set in only a handful of very basic locales. Putting these obvious budget restrictions aside though, it has to be said that ‘Kunoichi’ does very little to warrant a recommendation. The story on offer is really just a lightweight take on the basic ninja rivalry theme, making use of only five or six main characters that are simply labelled as being good or bad. There are no exciting revelations or clever twists either, and the weirdly perverted motives of the villains just seem like a desperate attempt to add something mildly fresh. Perhaps the most frustrating element of all though is the film’s open ending, as the complete lack of resolution to the heroine’s quest makes the whole movie feel somewhat pointless. In fact, the only real positive for me was Rina Takeda’s performance as she once again proves that she is capable of providing a strong on-screen presence.

Considering how little the plot has to offer, it’s disappointing to see that there is really only one proper fight throughout the whole of ‘Kunoichi’. The opening half of the film only manages to cough up a couple of half-hearted punches or kicks, none of which do much to excite or impress. The second half fairs slightly better, but seeing as how there are only two main bad guys the confrontations don’t exactly last very long. To make matters worse, the first of the combatants doesn’t even bother to fight back and he is beaten down by a series of quickly cut together kicks. The second and final showdown is probably the pick of the bunch, with Takeda showing off her kicking skills as well as proving that she is equally as adept with a blade. The choreography is pretty decent and they mix in some interesting grappling techniques that certainly provide a break from the norm. However, considering this is the movies only fight, it certainly isn’t special enough to make it a worthwhile watch.

Aside from a few glimpses of the impressive skills of Rina Takeda, ‘Kunoichi’ doesn’t really have anything else to offer. The film was clearly cobbled together with minimum thought and effort, and the annoying lack of closure only adds insult to injury.