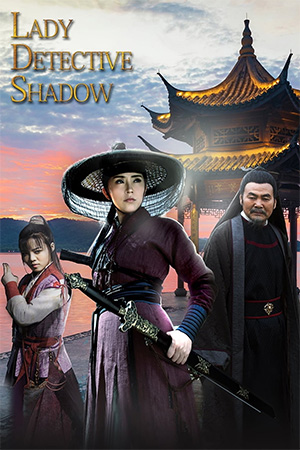 Sima Feiyan is a noted detective who, as well as an enviable mind, can match most adversaries when it comes to fisticuffs. Along with her assistant, Sima travels to a remote inn to look into a series of bizarre murders in the area, all seeming to have a link to the establishment. As the victims pile up, more and more odd characters become potential suspects, But Sima is one-step ahead of the killer and pieces together their plan to finally reveal their identity.

The remote desert inn is such a fruitful location for martial arts films; the claustrophobic spaces and oddball characters often converge to make an intriguing blend. It’s especially good for the mystery element of the genre, and films like King Hu’s ‘Dragon Inn’ have made superb use of the setting – even low budget efforts like Raymond Lui’s ‘Bloody Mission’ (a film I’ve grown to appreciate over the years) have shown what a rich seam it offers. Produced by Bey Logan, ‘Lady Detective Shadow’ is part Detective Dee and part ‘Come Drink With Me’ though nowhere as good as either.

It’s not that there’s nothing to enjoy here; the eponymous heroine and her plucky female sidekick are an excellent focus for the film. Yet the potential intrigue never quite ignites the way you hope it will and the story quickly loses its momentum. The fight scenes are watchable but too often fall into the trap of being overly reliant on wirework while never seeming to have any impact (it’s that floating wirework style that makes every strike look like a push). And too many modern genre films suffer from ridiculously over-enthusiastic editing; a cut every half second dilutes any potential excitement from the choreography quite quickly. That’s not to say that there aren’t things to enjoy here, but it’s hoped that the watchable lead heroines get a much better adventure to get their teeth into next time.