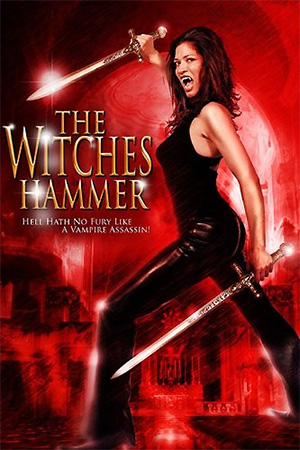 Following in the footsteps of films like ‘Blade’ and ‘Underworld’ comes this British vampire action film.

Rebecca is saved from certain death, after a vampire attack, by a mysterious organisation named Project 571. They wish to use her vampire abilities to kill evil-doers and train her to be a highly skilled assassin. After the agents of Project 571 are slaughtered, Rebecca is forced to work with a witch named Madeline (Beacham) and her assistant Edward (Sidgwick) to recover a magical book, the Malleus Maleficarum (or the Witches Hammer to its friends) before it falls into the evil hands of Hugo Renoir (Dover).

The Malleus Maleficarum that the story here is based around is actually a real book that was written in 1486. It was a guide on how to identify witches so that they may be caught and executed. In this film it’s little more than a macguffin. There’s effort put into a fictional back story on how the book came to be but in then end I still wasn’t much the wiser on why people wanted it so badly, nor did I care.

This is a film with promise that unfortunately fails to really deliver. There are some nicely designed creatures and characters, for example there’s an evil ninja that Rebecca must battle that possesses the ability to teleport and duplicate himself. This is a cool idea that is let down because of a dull fight with some very uninspired action choreography. The two most interesting and entertaining characters are a vampire midget Oscar (Tompkins) and his gluttonous vampire girlfriend Charlotte (Reeve). They are very Buffy-like creations but unfortunately do not get enough quality dialogue or action and are somewhat wasted. The acting in general is good, in a ‘Hammer horror’ campy kind of way – Stephanie Beacham hams it up like a trooper. The weak link though is Claudia Coulter. She doesn’t have enough charisma, emotional depth or martial arts ability to carry the film. In the fight sequences she has the look of someone who doesn’t really know what they’re doing. The film makers have kept the fights ‘grounded’ but they’re too slow and lacking in impact. I believe that considering the genre of the film, limitations of their leading lady and the fact that they had some nice CGI effects at their disposal, the movie would have been better served with a more fantastical approach to the action.

‘The Witches Hammer’ is certainly not a terrible film but neither does it contain much to recommend it for.