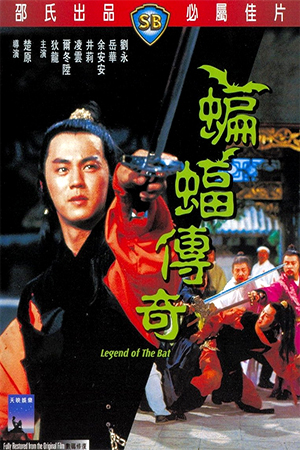 The hybrid kung fu drama/murder mystery that was ‘Clans Of Intrigue’ proved to be a reasonable enough hit to spawn a sequel, ‘Legend Of The Bat’. The original cast and director return in-front on and behind the camera while a Gu Long novel once again acts as the source material for the production. Also repeated from the original is the attempt to combine the standard conventions of the genre with a more intriguing layer of mystery and investigation.

Following on directly from ‘Clans Of Intrigue’, ‘Legend Of The Bat’ begins with martial hero Chu Liu Hsiang (Ti Lung) and unusual ally/professional assassin Li Tien Hung arriving on a strange island after their previous adventure has ended. It takes little time for the pair to realise that this is an environment where danger appears to be round every corner and peculiar incidents are to be expected. Soon after arriving, Chu is targeted by a band of killers who have been hired to eliminate him. However, after uncovering the identities of the assassins, Chu hears their unfortunate story; one of the clan is slowly dying of an illness and can only be cured by a rare poppy to be found on a nearby island – a cure that has been offered if the clan kill Chu. On hearing this, Chu elects to help the otherwise righteous band and go to the island with Li assisting – for his own unusual reasons. The island is heavily guarded and run by the clandestine figure known as Mr. Bat, a man involved in the martial underworld who surrounds himself with wealth and opulence. During their journey to the island, the two heroes meet up with other people keen to get to the island of Mr. Bat and manage to use their savvy to get into the otherwise fortress-like base. As the warriors approach, each motive is fully revealed and new alliances are formed among the travellers as they face their ultimate challenge.

As with the original Li Tien Hung adventure, ‘Legend Of The Bat’ is a sumptuous visual feast that combines its on-screen brilliance with another dizzying storyline full of outrageous characters and situations. Chor Yuen’s directorial style means that ‘Legend Of The Bat’ boasts a multitude of colours and ornate sets that make an otherwise baffling film easier to appreciate. Yuen’s swordplay dramas always have a certain sophistication that lift themselves above the normal genre film and, despite their convolutions, retain the viewer’s interest. These convolutions will be discussed later, but first its worth noting the productions other strengths. Ti Lung once again shows how important his presence is to any film; simple scenes and moments are given notable distinction by Lung’s exceptional handling of his character. After fitting comfortably into the character of Li Tien Hung in ‘Clans Of Intrigue’ sees Ti Lung excel once more. Meanwhile supporting players like Yueh Hua are given plenty of opportunities to add another level of quality to the film.

‘Legend Of The Bat’ suffers from the same problems as its predecessor, namely its headache-inducing twists and turns. The film starts off with a reasonably straight-forward premise then pummels the viewer with a plethora of bizarre characters and double-crosses. Added to this is a tendency to rely on incredulous twists and turns in answer to various situations; one scene in particular sees the heroes locked in an impenetrable cage only for one of them to announce that they have a special hammer that can break the bars. Moments like this will undoubtedly alienate some viewers. There is, though, a certain charm to the whole adventure that makes it compelling viewing despite these unwieldy twists.