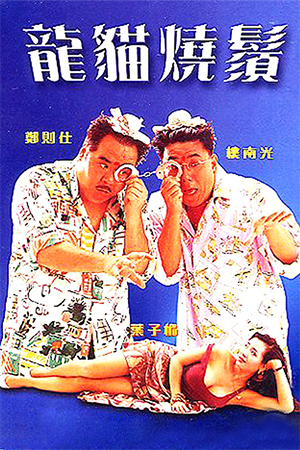 Action comedies in Hong Kong have never been renowned for their plots, but they often make up for a weakness in this area by utilising a charm unique to the local industry. Never was this more in evidence than during the productive output of the 80s and early 90s; the Jackie Chan, Sammo Hung and Yuen Biao films all displayed the winning combination of high-charged action with naive, yet enjoyable humour. There were certainly many highs during this period, but there were also some painful lows as well. This links very nicely to ‘Lethal Contact’.

Having toiled away in the police force for years without even the slightest hint of promotion, two hapless cops are assigned to another case they are expected to ruin. The case sees the partners teamed up with a visiting cop from Borneo (?!) who travels to Hong Kong to look for an important informant. After finally tracking him down, the cops are given a disc with the secret ledgers of a known drug baron who wants it back. In the ensuing attempt to get the disc, the policeman from Borneo is killed and the inept duo are once again left on their own. With the gang closing in on the whereabouts of the disc and a mysterious woman claiming to be the deceased policeman’s wife turning up, matters become increasingly entangled.

Writing down the plot to ‘Lethal Contact’ makes it sound much more interesting and cohesive than it actually is. Perhaps attempting to mimic the chemistry of John Shum and Richard Ng in the far more enjoyable ‘Pom Pom’ series, this ‘action comedy’ throws together two actors who had worked well together in the past and expects them to do the same here. Unfortunately ‘Lethal Contact’ is as unfunny as film-making gets, with endless low-brow jokes that fail to register even the slightest smirk. What increases the incriminations towards Kent Cheng and Billy Lau is that they also shared the directorial responsibilities, managing to make what was never promising material into what is truly mind-numbing. The only hint of redemption is during a couple of mildly entertaining action sequences that take place during the course of the film. Even undemanding fans are advised to look to the numerous better examples of the genre than this deeply disappointing effort.