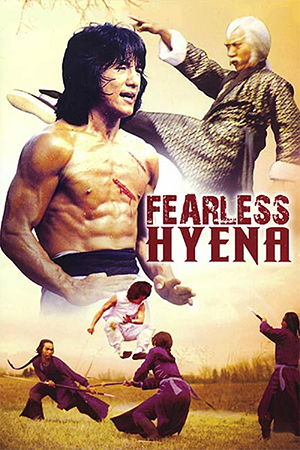 This was Jackie’s last film under his contract with producer Lo Wei. After his huge success with ‘Drunken Master’ and ‘Snake In The Eagle’s Shadow’ for Seasonal Films, Jackie was allowed to write, direct and choreograph this feature.

Shing Lung (Jackie Chan) is a lazy and mischievous young man. He lives with his grandfather (James Tien) who teaches him the family kung fu. He’s told by his grandfather to find a job and ends up working at a shady kung fu school fighting all comers. Meanwhile, villainous General Yen (Yen Shi-Kwan) is roaming the countryside murdering anyone who opposes his clan. After Yen kills the grandfather, Shing Lung must train with his new master (Chan Wai-Lau) to exact his revenge.

As you may be able to tell from the above synopsis this has many of the elements familiar to the old school kung fu genre. Films of this nature, to me, are like blues or folk standards. The song structures remain basically the same but each artist brings their own style and ideas to the piece. Unlike the Lo Wei directed movies Jackie had been making previously where he’s rather stern and humourless, here he’s more like the Jackie that would become one of the world’s biggest action stars. Directing himself he gets to showcase his own brand of charm, naivety and bravado in a film full of comedy and action.

‘Fearless Hyena’ is split pretty much straight down the middle. For the first 45 minutes Jackie is basically having fun. He gets some light-hearted training, has a failed job interview at an undertakers with Dean Shek (making a thankfully brief cameo) and dresses up and mugs for all he’s worth as a goofy looking pauper and a woman. These scenes are amusing rather than laugh out loud funny but they’re thankfully never grating or at the expense of the action. At the halfway point of the movie Shing Lung’s grandfather is killed. After this the comedy slips away somewhat as Jackie gets more serious. There are some impressive training sequences including Jackie doing 14 consecutive upside down sit-ups as he develops his new ’emotional kung fu’ in preparation for his showdown with the white haired villain, Yen.

The action is excellent throughout the film. It’s intricately choreographed and very well performed. Most of it is open hand combat but there also some brilliant weapons fights, especially the penultimate fight between Jackie and Yen’s spear wielding henchmen. The final fight between Chan and Yen is a very good ending with Jackie typically ditching traditional kung fu to fight with his own self created kung fu style. The only slight problem is that the previous fight is so good that the ending is a little bit of an anti-climax.

The direction, cinematography and writing is nothing special and the film is certainly not up there with the best in Chan’s canon of work but with excellent action, a few chuckles and Jackie’s charm the film is an enjoyable watch.