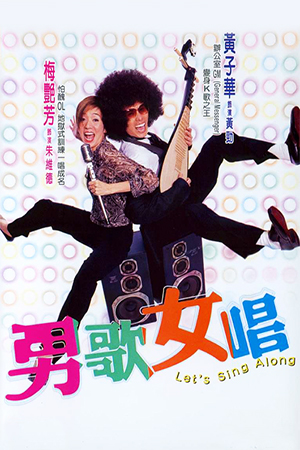 The late Anita Mui has contributed as much to Hong Kong cinema’s identity as nearly any other actress. It’s therefore unfortunate that the inept ‘Let’s Sing Along’ was one of her last roles before her tragic death, so weakly constructed is the supposed comedy of the film.

Shy, mousy Chu (Mui) is the kind of loyal office worker who seamlessly blends into the background while her workmates interact. Constantly pushed aside and undervalued, Chu is the complete antithesis to brash colleague King whose arrogant patter has helped his employer ignore his atrocious punctuality. Keen to change, Chu decides to ask King to teach her his legendary karaoke skills to help her gain self-confidence. King agrees when his new charge is persuaded to pay-off his debts and the transformation now begins. From a makeover to a chance to perform in public, Chu is gradually turned into a woman who realises her own strengths. This fact is also appreciated by King who finds the teacher/student dynamic of their relationship gradually turning into something more substantial.

The idea of a romantic comedy based around karaoke is a parochial one; while we’re familiar with the idea of the partially inebriated wailing into the microphone here in the West, it’s still a concept that works better in the East. Nevertheless, judging by the lukewarm reception afforded to the film on its release, perhaps it’s not just Western viewers who were bemused by this plodding production.

Matt Chow is a director who caught my eye with his enjoyable character-driven piece ‘United We Stand, And Swim’, but ‘Let’s Sing Along’ shows none of its predecessor’s subtlety or wit. Instead, the driving force of the film is Dayo Wong’s strutting performance – an aspect that viewers will either love or loathe – and the outrageous scenes of various losers battling on the karaoke stage. Chow does little to develop a relationship between his leads and simply expects the trials both of them go through to ignite some undefined spark. Few rom-coms – even the very best – would have delusions of grandeur, but at least they make the focal point something actually worth watching; at the climax of ‘Let’s Sing Along’, the two characters realise that they have a deep affection for one another despite little evidence of chemistry in the previous 80 minutes. Such tacked on emotion is devoid of any real impact.

Anita Mui certainly deserved better than this. Despite a reputation for being the ‘Asian Madonna’, Mui was versatile enough to play everything from the self-confident to the oppressed. In ‘Let’s Sing Along’ she is far better than her material, displaying an awkward insecurity that nevertheless makes her sympathetic. Unfortunately she is expected to wade through poorly written comic material and endless scenes that seem pointlessly padded out. It’s such mediocrity that sinks whatever chance the film had of rising above its uninteresting premise.