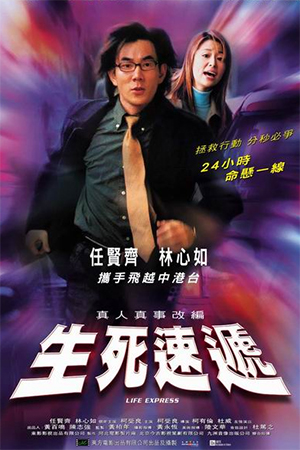 Perhaps the main reason why ‘Life Express’ has been widely heralded on its DVD release is the unfortunate fact that it was Blacky Ko’s last film before his death. In setting out to review a film that only came to my attention due to sad circumstances, it is vital to try to judge the production on its own merits.

Keen footballer Fai lives with his mother and disabled grandfather in mainland China, unaware that he has a rare medical disorder. After playing with his young friends, Fai collapses at home and his grandfather – despite the obvious difficulties – manages to alert the authorities. Fai is rushed to hospital in Beijing where the doctors release that their young patient needs specialist attention. In desperate need of a particular kind of bone marrow donor, Fai is oblivious to the enormity of the task though his mother’s obvious distress begins to worry him. Meanwhile in Taiwan, a young doctor (Ren) hears of Fai’s situation and, with the help of his fiancée, sets out to find someone to donate the needed bone marrow. As it happens the only person in a position to help is a prison inmate who, after much reflection, agrees to act as a donor. As Fai’s condition worsens, the extraction takes place in Taiwan and the bone marrow is transported to Tai Pei airport to be flown directly to Beijing. However, a sudden earthquake threatens the whole operation and now the doctor faces a race against time to get to the airport before the last flight leaves.

Despite the obvious sadness of seeing Blacky Ko in his last appearance (which will be discussed later), ‘Life Express’ has enough raw emotion to stand alone as a powerful drama. Though it appears to be little more than a glorified episode of ‘E.R.’, ‘Life Express’ is far more moving than should be expected – it certainly has a deeper air of poignancy than the average episode of any medical drama. The scenes of Fai with the little girl who’s been diagnosed with leukaemia are very hard to watch without the odd tear forming. While such moments give the impression that Blacky Ko is relying on emotional manipulation, there’s undoubtedly an earnestness to these scenes that transcend expected melodrama. Obviously the nature of the storyline means there are a few instances of melodrama, but it’s still a more successful film than it initially seems.

Plaudits for the effectiveness of a clichéd film go to the young actor playing Fai and the actress playing his young friend. It’s very difficult to be too harsh on a film that has two such young thespians giving performances that are so heart-wrenching. The only downside is that this isn’t a film that just tries to be a medical drama; the closing twenty minutes turns into a race-against-time narrative with the two doctors rushing through earthquake debris to get to the airport. The idea itself isn’t the problem, rather its the late appearance of this plot twist. As it just occurs in the closing quarter of the story, there’s a definite feeling that it has been awkwardly squeezed in some kind of misguided attempt to inject more tension. Therefore, what was succeeding as a touching medical drama tries to juggle another pointless element without there being a need for it. In a similar vein, Richie Ren and Ruby Lin are only marginal figures in the storyline – this makes their characters uninvolving and underwritten. Despite their respective talents, they have little relevance until the film’s denouement.

The death of Blacky Ko shortly after production does add a deeper level of pathos to the film. Scenes featuring Ko’s character re-evaluating his life are particularly significant and make his subsequent scenes especially thought-provoking – the ending caption that asks for a minute to be spent in thought about Blacky Ko’s death also packs a punch. Thankfully, ‘Life Express’ isn’t a bad film for Ko’s career to have ended on. While the excursions into disaster flick are unwelcome and the odd cliché doesn’t aid the smooth running of the film, this is nevertheless an often sobering drama that impresses with the contribution by some of the young cast members.