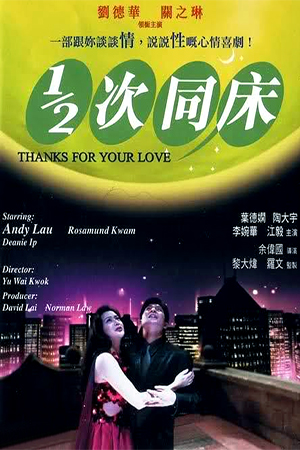 Andy Lau + romantic comedy = success. This seems to be a fairly common theory that spawns not only box-office hits, but also films that are mildly diverting at the very least. Each year producers test this equation and more often than not are very happy at the results. ‘Thanks For Your Love’ hardly inspires in any department, even though many aspects, such as the cast, seem to be ideal for the genre. The ever watchable Rosamund Kwan takes the bizarre lead role as a woman who becomes violent when touched by a man. Her future husband finds that, with the slightest caress, he ends up viciously battered by this involuntary action and therefore begins to lose patience with his fiancé. The final straw comes when the boyfriend receives a particularly harsh beating and decides to call their relationship to an end. Shortly after her sudden heartache, she meets a crude and earthy waiter who appears to be far more self-confident than he is. After he helps her friend out during a typical farce situation, Kwan decides to spend some time with him, imagining he could be different from the other men she’s met. This notion is quickly erased when the two spend just a few minutes together and form an instant dislike to one another. However, Kwan is led to believe that her awkward new associate has the skill to stop her unusual defect and therefore looks to him to cure her of it. Lau sees this as a golden opportunity to start a new life and convinces her parents he is the new boyfriend on the scene. This trick hardly helps the relationship of the pair though matters do gradually improve, forming into a mutual cease-fire. In typical romantic comedy fare, these former enemies now begin to realise that they really do have hidden feelings for each other.

It’s difficult writing about a narrative that is so trite in its attempt to set up the inevitable romantic entanglements. Normally the framework of such a film is at least clichéd, but here it is simply bizarre and uninvolving. Two major flaws for any romantic comedy are when it is not even slightly amusing and totally devoid of any sympathetic romance. Sadly, ‘Thanks For Your Love’ is the perfect example of this. Not only is it very difficult to care what happens to the characters, but it also begins to outstay its welcome after a mere fifteen minutes. Thereafter the experience becomes tedious and even loses whatever curiosity value it may have initially held. Lau and Kwan are certainly an attractive couple and have proven themselves in this field countless times before, but here they simply go through the motions and expect the audience to be engaged by their lacklustre efforts. To complete the misery, the film features an abundance of woefully forced ‘comedy’ that proves to be the final nail in the coffin. There is the odd moment of hope within some scenes, but these are sporadic and soon fizzle out. Avoid.