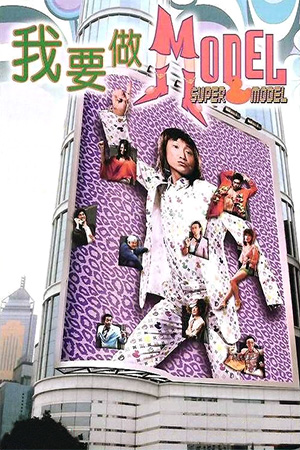 The fashion industry remains so ripe for lampooning that it provides rich material for film comedy; the self-importance and pretensions of the models and designers lends itself perfectly to a comic scenario. Ben Stiller enjoyed a partial success with the enjoyable, but flawed ‘Zoolander’ while Hong Kong’s latest comedy star, Ronald Cheng, sets his targets on the very same inspiration. ‘Super Model’ does owe a huge debt to ‘Zoolander’, but tries to put a unique Chinese spin on the production.

Mandom (the outrageous coiffured Cheng) is at the pinnacle of his field. Adored by rabid fans, elevated by his contemporaries, Mandom is practically untouchable in the world of male modelling. Two things conspire to end his dominance of the fashion world: Firstly there’s the gradual ascendancy of new model Fantasy (Leung sporting a mullet from the depths of hell); More worrying is a threatening letter Mandom receives from a mysterious antagonist. To help him with the latter challenge, the Hong Kong police assign young detective Karena (Lam) to protect him and uncover who is behind the conspiracy. Initially there is an expected friction between these two very different professionals – the frivolity and banality of the fashion world agitates Karena while Mandom is flustered by his protector’s lack of grooming. Karena follows Mandom and his two best friends around as they engage in public events and fashion shows, while also finding the time to make extended visits to the beauty salons. As she finally sees beyond his ostentatious facade, Karena sees the insecurities and humanity within Mandom and (expectedly) the two fall in love. However, the threatening letters return, Fantasy wins the lucrative ‘Peking Duck’ contract from Mandom and the supermodel now has the onerous task of meeting Karena’s grotesque Mainland family.

Ronald Cheng’s career is on the rise after the success of ‘Dragon Loaded 2003’ and this hugely popular hit. Combining some of the grimaces of a young Chow Sing Chi with his own camp persona, Cheng is a winning personality on screen. Despite my misgivings about him, Cheng proves to be a natural comic with a freakish countenance that transcends the language barrier. Prancing around like a Chinese Marc Bolan, Cheng is excellent as Mandom, clearly relishing the opportunity to be necessarily over-the-top. Clothed in the most ludicrous attire ever to hit the screens, Mandom makes Zoolander look like John Major and eats up the screen with his larger-than-life characteristics. The charming Karena Lam is suitably serious, acting as a perfectly incongruous screen partner to Ronald Cheng and his brand of cinematic insanity.

I usually find myself criticising Vincent Kok’s awkward direction, but here he sets the tone and pace perfectly. Unlike many of his productions, where things like consistency are cast to one side, ‘Super Model’ has enough of a hook to keep the viewer’s interest despite its relatively long running time. Kok doesn’t interrupt Cheng’s energy with his own ideas of humour, but instead he lets his star flourish in the lead role and help the audience forgive the film for the unimportant blackmail storyline. Kok’s only real failing here is that he pays a little too much detail to ‘Zoolander’; a few scenes and even more gags are guiltlessly plagiarised from the Ben Stiller film. The fact is that ‘Super Model’ has enough of a Chinese spine to make the imitation of its Hollywood counterpart completely unnecessary and appear a tad lazy. Vincent Kok’s direction is far more reliable here than it has been in many of his other big productions, so when Kok has to steal major jokes from other films it is especially pointless.

Despite the constant reminder that ‘Zoolander’ is its influence, ‘Super Model’ manages to create its own identity and avoid just becoming a pale imitation. The very Chinese moments of humour – including Mandom’s meeting with his future in-laws – are among the film’s funniest scenes, making use of the localised brand of humour. ‘Super Model’ is also crammed full of celebrity cameos, some brief, some extended. Kenny Bee’s rejuvenation continues with the former idol playing another cackling villain, while its once again a pleasure to see Sam Lee tuning into his comic side in a big local production. The most surprising appearance – and probably the most enjoyable – is Ricky Hui as the creaky ‘King Of Models’; in his ten minutes on screen, Hui is delightful despite looking quite ridiculous in his outlandish outfit. The whole cast give the impression that the film was as much fun to make as it was to watch.

‘Super Model’ is, for the majority, a superior comedy that bursts forth with copious amounts of energy and imagination. Ronald Cheng perfects the art of being brash without becoming an annoying presence and gives plenty of indication that Hong Kong may have a new pretender to Chow Sing Chi’s comic crown. While many stars have been groomed as ‘the new Chow Sing Chi’, Ronald Cheng is one of the few examples of a comedian who has found his own style without just copying Chow. As his films continue to succeed at the box-office, it would seem like Ronald Cheng is here to stay. On the strength of this entertaining feature, that wouldn’t be such a bad thing.