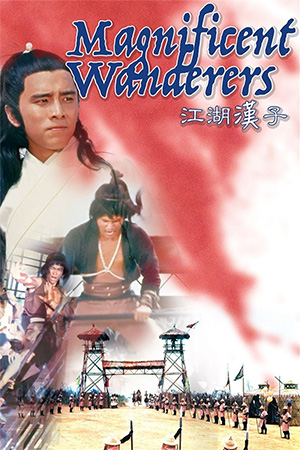 Millionaire Chu Te-Sa (Chiang) invests his considerable wealth into the rebel movement who are intent on usurping the ruling Mongol powers. His goals are impeded by a lack of support though and the supposed allies he has made in the town are merely eager to get their hands on his money. During an attack where these craven ‘comrades’ flee, Chu befriends three con-artists who relish the chance to show off their fighting skills. The trio subsequently agree to help Chu in his quest to end Mongol rule and hatch a plan to destroy a major munitions dump.

‘Magnificent Wanderers’ is widely derided as one of Chang Cheh’s lowest points as a director. Teamed with Wu Ma – a film-maker who is not incapable of displaying skill behind the lens – Cheh clearly struggles with the mood and pace of this awkward genre flick. That said, there are some elements within the film that do have potential and perhaps the sheer vitriol levelled at this production is a little harsh despite its obvious flaws.

The film starts promisingly. Fu Sheng relishes playing a opportunist hero whose happy-go-lucky sense of adventure lifts the early scenes above the humdrum and next to him are two fine supporting players in Chi Kuan-Chun and Li Yi-Min. Each of the trio has a certain characteristic that adds a little something to the overall effect, from Chi’s brutish stoicism to Li Yi-Min’s perky gymnastics. Such attention to the cast makes the opening half hour thoroughly enjoyable and holds out much promise for the following sixty or so minutes. Unfortunately that is where the film begins to unravel.

Key to the problems that Chang Cheh and Wu Ma fail to address is the woeful lack of direction. There is no attempt to create a storyline that offers a real hook for the full duration and the opposition that the heroes face is more comedic than intimidating. The Mongol hordes are lead by a twitching, stuttering leader who exists mainly for humour and the villains under his command offer no real threat to the protagonists. It almost seems as if the background characters and the main plot were elbowed aside in favour of keeping the stars in the spotlight, a fact that makes the latter stages of the film drag unnecessarily. There are quite a few spurts of fight action, but these are in-keeping with the playful tone of the film and offer little spectacular.

There is a place for humour in the genre and ‘Magnificent Wanderers’ struts along confidently in its opening act. It takes more than just that energy to keep a story from faltering though and the two directors foolishly ignore this fundamental fact. It’s not the nadir of the Shaw Brothers catalogue as some have implied, but the potential it initiates is eventually wasted and the grand finale is a damp squib. That is especially hard to accept when one looks at the talent associated with this production.