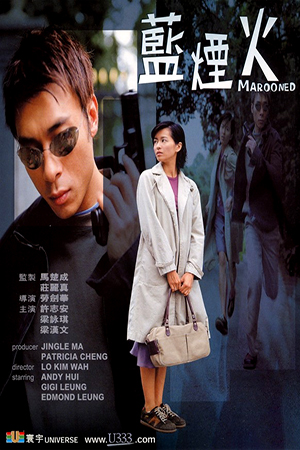 Honest cop Tai (Hui), resident of Macau, finds himself confronted with a rather awkward dilemma when he takes part in a bust operation on an illegal gambling den. After the ensuing confrontation that sees the criminals flee, Tai discovers that one of their number is his own cousin. The contrite cousin begs Tai to keep the money to pass on to the local crime lord, Kwuen, otherwise he will undoubtedly be killed. Although the law enforcer prides himself on his work, he agrees to pay the money into Kwuen’s account to save his cousin’s life. Due to heavy work commitments, Tai asks his loving girlfriend Siu-yu to go to the bank and deposit the money, a task she happily does without knowing who the real owner of it is. Unfortunately, the bank is robbed as the money is about to be deposited and Siu-yu – and to a greater extent Kwuen – loses everything. Now Tai is given an ultimatum by Kwuen: find the money or give up your life within the next few days. With time ticking away and no hope of escaping Macau, Tai has to continue his investigations into the robbery while also keeping the truth away from the people dear to him.

After the excellent ‘Sunshine Cops’ and the hugely enjoyable ‘Irresistible Piggies’, I decided to once again look into the work of relatively under-appreciated director Liu Kim Wa. Though ‘Marooned’ proves to by another accomplished work by the film-maker, it’s about as different in tone to the other two as a film can by. While ‘Irresistible Piggies’ revelled in exuberance and energy, ‘Marooned’ is a more laid-back production that tackles an intriguing premise in a delicate way. Liu Kim Wa’s said execution of the material demonstrates his strengths and his limitations in the director’s chair – thankfully, though, there are more instances of the former.

The fairly common move of casting two major recording artists in the lead roles means that ‘Marooned’ has a degree of the screen energy that big-budget productions thrive on. While Andy Hui and Gigi Leung aren’t in the same league as Tony Leung and Maggie Cheung in terms of charisma and chemistry, both acquit themselves well to their well-written characters. The spark between the pair seems to alternate between periods of complete stagnation and moments when they seem to truly care for one another’s well being; the bond between the pair improves as the film progresses and the moment when Hui tries to break off the relationship to protect the woman he loves can be commended for a pleasing edge of humanity. Nevertheless, some viewers may feel that the atmosphere lacks the emotional punch that has often been associated with the grander works of Hong Kong cinema.

While ‘Marooned’ is never especially exciting, it is well-paced and character-driven – a trait that is rewarding for those who stay the course. Liu Kim Wa is a more than competent director who, may lack the distinction and control of some of his peers, but gives the viewer a thriller that is a certainly not the norm. The breezy Macau locations add a fresh atmosphere to the overall look of the film; the unusual European-influenced architecture makes a pleasant change from the city streets of Hong Kong. ‘Marooned’  floats along harmlessly for 90 minutes – you could do a lot worse than invest in this.