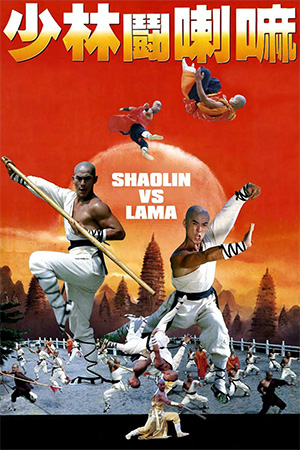 Yu Ting (Lo Rei) is a keen practitioner of kung fu who roams the country looking for a true expert to become his master.  Whilst in pursuit of his quest, he saves a young thief by the name of Hsu Chi (Yen) who turns out to be a lost Shaolin monk.  Chi informs Ting that his master is the best in kung fu so Ting requests a duel with him to see if he is a worthy opponent.  As it turns out, the Shaolin monk is highly skilled but he refuses to take Ting as a new pupil.  Disappointed but not disheartened, Ting remains close to the temple in the hope that he will change the master’s mind. He becomes involved in other pursuits and rescues a young girl from the grasps of the Flying Eagle gang.  This angers their leader who is a Lama (the sworn enemies of the Shaolin) and, assuming Ting is a monk, he wages war on the Shaolin.  Now their only hope lays in the hands of Ting who becomes a student of the Shaolin in order to defeat the evil Lama.

If someone were to write a summary of every traditional kung movie ever made, you’d no doubt see the sentence “underdog trains with old master to beat the bad guy” repeated numerous times. ‘Shaolin Vs. Lama’ is yet another film to follow this familiar path, but thankfully Lee Tso-Nam is a director who knows how to entertain his audience. While it is true that the film is littered with a lot of the standard clichés, Tso-Nam never allows the film to get bogged down in stupid plot points or unnecessary comedy. Instead, he gets the basics out of the way early on and then proceeds to make the film about the hero’s journey. This aspect is what makes ‘Shaolin Vs. Lama’ so entertaining as Yu Ting genuinely looks to grow from his experience and you can see his fighting skills steadily improve with each bout. Don’t get me wrong, I’m not saying this is the pinnacle of filmmaking but it is a fun and interesting way of recycling an old format.

When it comes to the action, you always know that you’ll get at least a few good fights when Lo Rei is involved. As expected, he looks as athletic and nimble as ever here and demonstrates several different styles throughout the course of the movie.  Each of his fights are also very well choreographed, with some nice utilisation of his superior kicking abilities and acrobatics.  However, for the majority of the film he remains an apprentice and the actor that comes off the best is actually his teacher. He flips and fights with a real ferocity and shows skills that are rarely seen from outskirt characters in these types of movies.  In fact, this seems to be a recurring attribute throughout ‘Shaolin Vs. Lama’ as all of the actors involved,  from the bad guys to the Shaolin monks, all display real skill and this really helps to make the fights even more entertaining.

‘Shaolin Vs. Lama’ is a notch above most Taiwanese chop sockies simply because Lee Tso-Nam knows how to keep it interesting. Sure, it has the same basic idea but it evolves nicely and there are plenty of great fight scenes thrown in along the way. What more could you want?