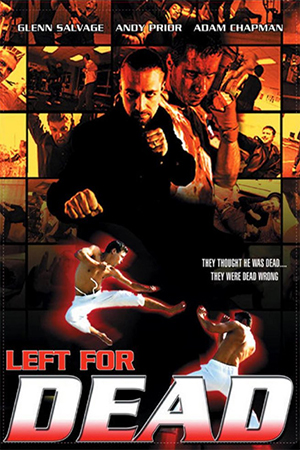 Williams (Salvage) wishes to leave the employment of his gangster boss, Kincaid (Chapman), after completing “one last job”.  Kincaid orders his other two henchmen, Taylor (Foiadella) and Dylan (Akehurst), to kill Williams once the job, the slaughter of a drug dealer and his gang, is finished. Williams manages to twice escape the clutches of Taylor and Dylan but only after he is shot and poisoned (with cyanide?!?). He recovers and teams up with a kickboxer, Kelso (prior), who has been tortured and forced to leave town by Kincaid’s thugs. The two men set out to exact their revenge.

This film, as far as I’m aware, is rather a rarity. A British martial arts movie, it was funded by the makers (Ross Boyask and Phil Hobden) and is described, by themselves, as “micro-budgeted” and this is obvious from the very beginning.  The way other film makers in the past have overcome the constraints of tiny budgets to make good movies is by using flair and imagination. Panna Rittikrai (action director of ‘Ong-Bak’ and ‘Tom Yum Goong’) made some entertaining low budget action films in Thailand with talented screen fighters and stuntmen willing to taste some pain for a good shot. ‘Evil Dead’ became a cult hit with the aid of a highly enjoyable script and some dazzling and inventive direction. Unfortunately, ‘Left For Dead’ rarely exhibits any of these traits. It’s all in the style of a Guy Ritchie film with cockney gangsters all dressed in black, moments of strong violence and dark humour. Unlike Guy Ritchie’s best films, ‘Lock, Stock And Two Smoking Barrels’ and ‘Snatch’, this movie is poor. The direction never rises above average, the script is cliché ridden (the “one last job”, the laconic, stony faced anti-hero with a tragic past, the fighter who fails to take a dive in a fixed fight etc.), most attempts at humour are just plain unfunny and the acting is wooden and looks amateurish.

These faults would be, in part, forgiven if the action was good but it isn’t. While the fights are plentiful, they are unimpressive and repetitive. The two actors who play the main villains, Taylor and Dylan, are weak screen fighters and are used far too often. This is highlighted by the opening action scene as  they unconvincingly blast and slash their way through a horde of goons. Glen Salvage is competent but lacks any kind of ‘wow factor’ that is required from your lead actor and his fighting, but for a few quick exchanges and nice kicks, is as bland and uncharismatic as his character. Things do pick up when Andy Prior, who looks like the most talented martial artist, joins the mix but only slightly. The long and brutal final action set piece is the best in the film but even this still fails to really excite, lacks clarity and feels disjointed.

I can’t think of a good reason for you to part with your hard earned cash to watch this movie, especially when you can watch films for free on the internet of a similar production standard on a website like The Stunt People. Their short films are funnier, more enjoyable and contain far superior action. I’d like to see more British martial arts films in the future. I just hope they’re a lot better than this.